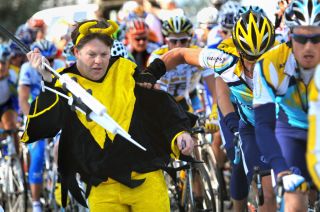 UCI president David Lappartient’s recent admission that anti-doping tests within cycling had dropped by 95 per cent due to the coronavirus pandemic and the resulting lockdowns was met with a sense of resignation rather that all-out surprise.

Few, if any, would argue that laboratory resources should not be diverted towards COVID-19 needs at present or that lockdown laws should be waved for the travel of athlete testers. However, the alarming news that anti-doping measures have been scaled back so dramatically are a cause for obvious concern, with experts raising questions over how anti-doping bodies can remain confident that drug cheating can be detected, and whether the capacity of five per cent of tests means there is free rein when it comes to doping.

While Lappartient’s five per cent comments still require verification from the UCI – and testing is certainly just one weapon in the fight against doping – they were not denied by WADA earlier this week.

Only 5% of anti-doping tests carried out due to lockdown

In an interview with Cyclingnews earlier this week, the CADF, the anti-doping arm of the UCI, admitted that testing levels dropped after March 15. Social distancing measures, coupled with requirements for laboratories on a global scale to allocate resources and PPE to where it’s most needed in the struggle against COVID-19, has even led to riders speaking out. In recent weeks, Romain Bardet, Tom Dumoulin and Thibaut Pinot all disclosed that they have not been tested in some time, with Pinot admitting that his last test came in October 2019.

The CADF has not made public the number of tests carried out in 2019 but its 2018 data shows that 3659 Biological Passport tests were carried out in competition, while a further 1926 were taken out of competition. Urine and blood tests were also in their thousands during that period but, with a black hole in testing and no timescale on when normal levels will return, there are fears that doping may increase.

Robin Parisotto is a leading anti-doping expert and previously worked as part of the CADF’s Biological Passport programme, which tests professional cyclists. The Australian, who helped in catching a wave of drug cheats during the early years of the Biological Passport, told Cyclingnews that a testing programme running at around five per cent would never be robust enough.

"You’d have to be very, very targeted on a passport programme and only go for the ones that showed significant changes, rather than go for all athletes, or random athletes," Parisotto told Cyclingnews.

"Anyone on the outside should have a pragmatic view on it because anything working at five per cent is basically not worth it. You don’t need to be an athlete biological passport expert to work that out. It’s a complete and utter waste of time given that so few riders test positive. It can’t just be window dressing. What’s the point of testing anyone other than the ones showing significant changes? You might as well close up shop if you test others. You can’t run an anti-doping testing programme on 5 per cent. Of course not."

Instead, Parisotto raised the idea as to whether testing should be paused completely while lockdowns across Europe and the rest of the world remain in place.

The Australian suggested that pausing testing and then saving those resources for when competition resumes could be a more sensible option, although that too comes with problems.

"I’ve said that they should stop testing now because they don’t yet know for sure when competition is going to return. When we know that competition is coming back then you go in hard, with all guns blazing."

The UCI has announced a provisional race calendar of sorts but if testing is completely shut down for the time being, or kept at the same reduced levels, then it opens up the opportunity for abuse from athletes looking to gain unfair advantages. Even if they’re not competing, athletes could potentially dope to train – meaning that they can take substances normally banned in competition and abused out of competition to improve their training volumes and therefore their long-term performance.

"That’s possible," Parisotto admitted, "and we know that some of these drugs can have long-term effects to improve strength, endurance and power. It’s feasible that this would give you a benefit down the track and we might need to accept that this might happen if you’re only testing 5 per cent of the athletes.

"Just put two and two together and figure out what that means. If the testing is running at just 5 per cent capacity, then the chances of escaping detection are just magnified to the extent where it’s just a free for all."

'Neo-pros could dope up to the gills'

When it comes specifically to the Biological Passport, Parisotto also raised concerns around neo-professionals who will have only been part of the testing pool for a short amount of time. The passport typically takes between four to six tests per season from an athlete under normal circumstances. These are used to provide a longitudinal view of a rider's blood values, and while they don’t show positive tests, they can be used to detect anomalies that can lead to targeted testing.

Baselines, however, are incredibly important and young riders who haven’t yet set their baselines could become some of the biggest abusers.

"If there’s fresh blood in the peloton then they could potentially dope to the gills with little to no chance of being tested and then build up their stamina and endurance," Parisotto said.

"It won’t last but it can certainly lift their training intensities. It’s probably more with steroids where you’d see the bigger improvements rather than with blood doping."

Ross Tucker, Professor of Exercise Physiology at the University of the Free State in Bloemfontain agreed with Parisotto’s assessment of the 95 per cent drop in testing, arguing that it made anti-doping measures almost worthless.

Lappartient had argued that, even with five per cent of tests carried out, the Biological Passport would still be able to detect suspicious patterns.

"I don’t know if there’s a threshold at which point it would be useless but that number would certainly seem well below that," Tucker told Cyclingnews.

Tucker also went further, adding that, due to lockdown measures, even targeted testing would suffer.

"The five percent that is being carried out must stand out but it must be tests where there is still some freedom of movement and in close proximity to where the tester is based. Therefore, even targeted testing isn’t going to be targeted in the normal way. Normally a targeted test is based on good information and it’s only outrageous distances of travel that hinder the test from happening. Now, you have practical constraints over the normal constraints. Proper testing now seems non-existent.”

Dopers have their own constraints

All of this doesn’t necessarily mean that professional cycling has suddenly opened its doors to undetected and mass-scale doping. Even if certain individuals do want to venture down the road of performance enhancement, they will still be restricted in some of the same ways as the governing bodies trying to catch them.

“It’s probably not entirely free rein because you still have to be mindful that you still might be tested at some point,” Tucker said. The one consideration against free rein is the fact that athletes themselves are constrained by geography and travel. We know from the past that one of the avenues for an athlete to dope was to find isolated places, to move underground and then you’re essentially evading. Lockdown to some degree takes away the ability to evade. It feels like there’s a bit of a push and pull, with some factors favouring and hindering, but it feels like the current situation hinders the anti-doping work rather than the doper.

"But when it comes to the passport, the whole premise of anti-doping is to build a longitudinal record. Now you have a black hole in those longitudinal records and that allows athletes to do things to change the future of their records.

"Before this, when it comes to the passport, in order to get caught you’ve either got to be grossly unlucky or grossly incompetent," Tucker added. "Some argue that the passport is like a speeding camera, that it’s a deterrent, but now there are no speeding cameras. So now you can’t argue that there’s a disincentive to dope and then ignore the fact that when you remove that disincentive, things can go the other way."

The UCI has been applauded for its quick thinking and responsiveness when it comes to creating a plan-B of racing for the remainder of 2020. Now, in order to maintain levels of credibility, the CADF must be allowed to focus on bringing anti-doping levels back up to speed.