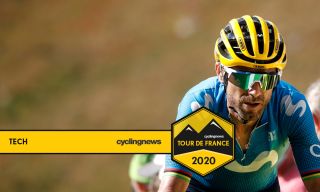 The increased safety that comes as a result of wearing a helmet is rather indisputable. Of course, the EPS foam construction is far from indestructible but in the event of a crash, if you had the choice of your bare skull impacting the road or wearing a helmet, you know which you'd prefer.

Such is the increase in protection that helmets are mandatory at UCI sanctioned events, meaning all riders at the Tour de France are required to wear one. But long gone are the days of leather 'hairnet' helmets, today's helmets are required to pass stringent safety tests. That said, some go further in the name of safety than others. Many brands integrate a slip liner from Swedish company, MIPS (Multidirectional Impact Protection System), or their own rotational impact protection such as POC's SPIN (Shearing Pad INside).

Of course, as with any tech, the pros riding the Tour de France are given the very best available, ones that combine aerodynamics, ventilation, weight and safety. Read on for a rundown of who's wearing what.

Alternatively, check out our buyer's guide to the best road bike helmets, or if you wish to save money, our cheap bike helmets guide is for you.

As with any helmet manufacturer, Ekoi supplies a range of helmets suited to different disciplines. The AR15 is the brand's aero helmet, and is worn by sprinters such as Cofidis' Elia Viviani. It is available in an almost unlimited number of colours via Ekoi's custom program. The Corsa Light is the lightweight breathable option, which is being worn by Guillaume Martin. When Romain Bardet crashed on Stage 13, he subsequently finished the stage, but later withdrew from the race with a concussion. The Legende, which replicates the retro hairnet design using modern design principles, is the helmet that potentially saved Romain Bardet from worse injury.

Limar makes a range of helmets for road, mountain, time trials and even a full-face helmet for downhill mountain bikes. It's the lightweight Air Pro that the majority of the Astana Team have been using, and it was the helmet that Alexey Lutsenko wore to victory on stage 6.

The likes of Mikel Landa and Wout Poels have Rudy Project to thank for their helmets at this year's race. The brand makes helmets for all sorts of cycling disciplines, but riders have been using the brand's Spectrum almost exclusively, a helmet that blends aerodynamic shaping and large ventilation ports.

Barring any major incident, it's a safe assumption that this year's green jersey will be celebrated with a green Specialized Evade helmet, as both QuickStep's Sam Bennett and Bora's Peter Sagan duke it out for the sprinter's classification. Riders have the choice of the Evade, which is one of the best aero helmets available, and the lighter weight, more breathable Prevail II. Both integrate MIPS, as well as ANGi - a sensor which calls home in case of an accident (although they probably don't have it switched on during racing).

As Giant supplies CCC Team with its bikes, wheels, components, saddles, and more, it's perhaps unsurprising to see the team also sporting the brand's helmets too. Most of the team are using the new Rev Pro helmet, but a couple of the riders have used the aero Pursuit helmet on the faster days. Both of which utilise MIPS, to offer increased protection in the event of a crash.

EF Pro Cycling came into the Tour de France as the favourites to win the team classification, and so far, they've spent numerous days in the lead. This has been celebrated with the introduction of bright yellow POC helmets, which complement the pink and blue kit perfectly. Most of the team have been using the Ventral Air Spin helmet, which integrates RFID technology, which can be used to store vital health information in case of an accident. It also integrates its own rotational impact protection, called SPIN, to help protect its riders in the event of a crash.

In terms of exposure at this year's Tour de France, Giro has certainly gone for the more-is-better approach, with no less than four teams using the brand's helmets at the race. The Aether is the helmet that most riders have been opting for, but the brand also manufacturers the Synthe, and the Vanquish, which is the no-compromise-aero helmet in the range. All of which integrate MIPS, should a rider need to absorb some rotational impacts in the event of a crash.

The likes of Caleb Ewan and Thomas De Gendt are sponsored by HJC, a well-renowned Korean manufacturer of motorcycle helmets that has recently entered the cycling market. Most of the team have been using the IBEX 2.0, but for maximum aerodynamics, riders have been switching to the Furion 2.0.

SCOTT Cadence Plus Helmet
Scott Cadence Plus
Als.com
$157.49
View
See all prices
We check over 130 million products every day for the best prices
View All Deals

Like CCC with Giant, Mitchelton-Scott's bikes and components come from Scott Sports. They even provide shoes for some riders, and they supply the team with its range of helmets. We gave the brand's aero helmet four stars in our recent Scott Cadence Plus review, and the team has been treated to the new Centric Plus for this year's race. Both utilise MIPS for increased protection in the event of a crash.

Another team that has spent time in the lead of the team classification, and for those days, the Movistar team have also been donning yellow versions of their helmets. Given the late summer heat, most riders have been using the Abus Airbreaker helmet, but for the faster days, riders have been seen using the GameChanger.

Dave Brailsford's Ineos Grenadiers team (and it's former Team Ineos and Team Sky guises) have been sponsored by Kask since day dot. The team has been wearing the same Kask Protone helmet for six years now, and Colombian leader Egan Bernal is still rocking the lid that Froome used when he crashed out on the cobbles in 2014. That said, some riders have been sporting the Valegro helmet which has only been around for three years.

By the calculations of the Virginia Tech Lab, Teams Jumbo Visma and Sunweb are at the lowest risk of concussion in the event of a crash, as the Lazer G1 (Known as the Lazer Genesis in Europe) is the safest helmet they've ever tested. The teams also have the aero Lazer Bullet at their disposal, but riders have been using the better ventilated G1 for the most part - cooler heads prevail, and all that. Perhaps this is why both teams are enjoying such bountiful success at the race thus far.

Met today launched a new helmet, the Rivale, but it's the Trenta 3K that riders have been using for the most part at this year's race. GC contender Tadej Pogacar has been sporting a white-only version for his time in the white jersey, but the rest of the team are wearing the UAE Team Emirates edition model.

If there are any helmet brands in this list that you've never heard of, it's the sponsor of the B&B Hotels - Vital Concept team, Force. The Czech company is supplying the team with two helmets to choose from, the Lynx aero helmet or the Road lightweight option, the latter of which is being worn by Pierre Rolland.

Last but not least on this list, Nairo Quintana is wearing helmets from Bell, and while he has the choice of the Z20 Aero, it's the Z20 Ghost he's been wearing. Both integrate MIPS, which he was no doubt thankful for on his stage 13 crash.