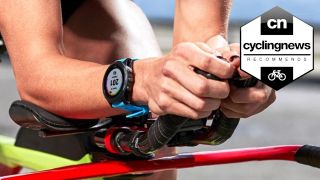 Over the years, the best smartwatches for cycling have become equally as powerful, if not more so than their bar-mounted relatives. Smartwatches can now track every metric under the sun, connect to external sensors, guide you through workouts, and even tell you your heart rate and blood oxygenation.

While a dedicated cycling computer might still be better for certain aspects of training — mostly because the screen is bigger and positioned in a rider's eye line — a modern smartwatch can accompany you on a bike, run, swim or surf, and is better able to incorporate your entire day's worth of metrics including sleep and recovery.

Some also prefer a watch for mountain biking (this writer included) as with stems getting shorter and bars getting fatter, there really isn't a great place to mount your computer where you won't pause your ride with your knee, or potentially lose it in a crash.

Here, we've outlined the best smartwatches, however if you're unsure exactly what separates the Best Smartwatch for cycling from their not-so-good counterparts, you can skip to our guide on what to look out for.

The ultimate GPS smartwatch from the cycling computer experts

Garmin's Fenix is now in its fifth iteration (it skipped the Fenix 4) and sits at the top of its outdoor range. There are three versions the 6, S, and X along with Standard, Pro, and Pro Sapphire in each — we're focusing on the Fenix 6 Pro here.

The watch face sees a larger screen than its predecessor but a more svelte bezel making it thinner and less obtrusive on your wrist. Inside the case is a multi GNSS chip so it can access GPS, GLONASS and Galileo satellite networks along with a barometric altimeter and three-axis electronic compass. On the bottom is Garmin's Elevate optical heart rate monitors with the Pulse Ox (Pulse Oximetry) functionally built-in — it can not only determine your pulse and blood oxygenation too.

It doesn't stop there; the smartwatch can handle Bluetooth, WiFi and ANT+ connections complete with support for power meters, it can guide you through workouts created on the device or synced from apps like TrainingPeaks, offers turn by turn navigation on preloaded maps, Strava live segments, crash detection and works with the Connect IQ store.

Suunto took the most complained about feature relating to smartwatches and threw everything it had at the problem until it wasn't a problem anymore — although unfortunately, at the expense of some other features. In fact, Suunto claims up to 120 hours of tracking in the power saving Ultra mode; before you hit start on one of the 80 available sport profiles, it will let you know how long the battery will last in each tracking mode.

With a massive 320 x 320px touch screen, Suunto has integrated the GPS antenna into the bezel, so you don't get the huge bump on the strap-like other watches in the range. The smartwatch can also take advantage of the GPS GLONASS, Galileo and QZZS satellite networks. You only get a Bluetooth connection here, but it allows the Suunto to talk to your phone and wireless sensors, including power meters.

Built-in is an optical heart rate sensor, and it's available with or without a barometric altimeter. In the power saver modes, the watch uses built-in accelerometers, gyroscopes and the compass to fill in the gaps between GPS pings — Suunto calls this FusedTrack. As we mentioned before, the Suunto 9's battery superiority comes at the cost of a few things; workouts can't be synced from third-party apps, there are no Strava live segments, and it misses out on other best smartwatch features like music control.

The Forerunner 945 takes the Fenix 5 Plus, swaps metal for plastic in the bezel and adds a few choice features like onboard music and contactless payments.

It has Bluetooth ANT+ and WiFi connectivity, plays nice with sensors of all sorts including power meters, can access multiple satellite location networks, and even has Garmin's new ClimbPro and altitude and heat acclimation features which were released with the Edge 530 and 830 cycling computers.

The battery life is claimed at 36 hours in ultra track mode, and the watch features the Elevate optical HR sensor including the Pulse Ox data — plus it's a lot cheaper than the Fenix smartwatches.

While a lot of people write Fitbit off as being a brand that just makes those step counter bands, the Ionic is actually pretty good training companion that doesn't scream bike nerd in everyday life.

It's the only Fitbit to have a built-in satellite location chip and has access to the GPS and GLONASS satellite networks for ultimate accuracy. Claimed battery life is up to 10 hours in GPS mode, and the Bluetooth facilitates a connection to your phone and beams activities over to the Fitbit app instantly — which can then be set to hit Strava automatically.

Fitbit's sleep tracking also seems to be a head above the rest, plus it has all the smartwatch features you look for like notifications, access to music streaming, and it can even send you an email when it needs to be charged.

The Apple watch has become uber-popular, and we'd venture a guess that quite a few people reading this right now have one on their wrist. It does all the things the best smartwatches do, has built-in GPS, optical HR and will give you about six hours of activity tracking. Apple has two ways you can track activities, either in its own Workout app or in third-party apps such as Strava.

Apple's own Workout app offers basic info on your training and as of the latest watch OS update can automatically share activities to Strava. However, there are a gazillion third-party apps that offer considerably more functionality, from your basic Strava or RideWithGPS, to apps that allow you to pull data from your power meter, to those which will give you turn by turn directions on the bike.

Buyer beware, the Apple watch will try and piggyback your phone's GPS even though it has its own built-in chip.

The Venu is Garmin's Apple Watch killer, it has an OLED screen, and has more built-in fitness features. As you'd expect the watch has GPS integrated, heart rate and PluseOx, a barometric altimeter and magnetic compass but in the native apps, your activities are not restricted by Apple's self-imposed walls.

The watch goes well beyond the basic data fields, there is limited power meter support, the Venu also has a range built-in structured workouts or custom sessions can be synced from Garmin connect, and it won't drain your phone battery trying to steal GPS.

Plus it's got all the smartphone features like contactless payments, Spotify and Amazon music support and basic health features like 24/7 hr and blood O2.

Sigma probably isn't the first name you think of when it comes to smartwatches but as the name suggests, the iD.Tri is a watch that's designed for triathletes so it works pretty well if you're just riding. As you'd expect, it has GPS, optical heart rate, a barometric altimeter, three-axis compass and can facilitate turn-by-turn directions including routes from Komoot. The watch also has built-in modes for structured workouts, and you can set up eat and drink reminders too.

The watch sees ANT+ and Bluetooth connectivity and plays nicely with sensors including power meters and your phone, and should it detect a crash, it can send an alert to predetermined emergency contacts.

It's budget-friendly, and you could buy two of them for the price of some of the other watches on this list.

What to look for when buying the best smartwatch for cycling?

Smartwatches often have multiple sport modes ranging from cycling to golf. Some will even have numerous riding profiles like road, gravel, MTB and indoor cycling, which allow you to not only tailor data screens to relative to what's relevant to that specific type of riding but also what sensors the watch needs to find.

Lots of smartwatches will also have multi-sport modes which allow you to start in one app and continue the activity in another.

If you're in the market for a smartwatch to track your rides, make sure it has it's own GPS chip and doesn't piggyback from your phone as some of the lower-priced units do — these usually fall under the banner of 'wearables'. Some of the higher end watches will also be able to pick up a signal from the GLONASS, BieDou and Galileo satellite networks. Whether or not you should enable these features depends mostly where you are in the world, however for the most part, we've found GPS is more than sufficient — enabling these additional satellite connections also puts a tax on the battery life.

Bluetooth seems to have become the standard connection protocol for communicating with sensors such as power meters, turbo trainers, and of course, your phone — even Garmin who owns the ANT+ protocol begrudgingly opened its watches up to talk with Bluetooth a few years ago. Most of the higher end watches will also be able to use ANT+, and some will even connect to your home WiFi network for ride uploads and firmware updates.

However, just because a smartwatch can connect to a sensor, does not mean it can decode the information it's sending. The main sticking point is power meters, and there are quite a few smartwatches that don't support power meters, or some will only display certain metrics like normalised power.

Optical heart rate is a cool feature, and it's nifty not to need a chest strap, the trouble is it's not actually that accurate unless you're standing still. All-optical heart rate sensors come with directions as to how they need to be worn, and for an accurate reading, an optical sensor needs to maintain solid contact with the wearer's skin. This is a herculean task when the unit is constantly being shaken and compounded by sweaty or sunscreen-coated skin.

For this reason, point to point accuracy is not ideal with wrist-based heart rate; however, they still do surprisingly well for averages.

Some smartwatches have barometric altimeters built-in as well as things like accelerometers and gyroscopes. If you're after realistic altitude data, a built-in barometric altimeter is a must, as GPS altitude data is about as useful as a multi-tool without a 5mm hex wrench. As barometers measure air pressure, some watches will even give you a warning when the air pressure suddenly drops signalling a storm might be moving in.

Mid- to higher-range GPS watches will also have accelerometers and gyroscopes built-in which can be used to supplement spotty satellite coverage or during power-saving modes that involve less frequent satellite reporting.

Smartwatches will eat through a charge when tracking your location, so it's important to look at the GPS battery figure when weighing up your options. Also, consider if the watch has battery saver functions that reduce the frequency of GPS reporting but may rely on other built-in sensors to fill in the missing information.

Basically, every modern smartwatch can connect to your phone via Bluetooth and let you know who is calling. Some will also allow for Strava Live segments, contactless pay features, music control and may even have onboard storage for your tunes.