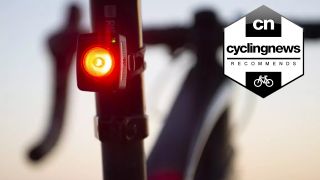 There are a plethora of rear bike lights available which can be used 24/7 to improve visibility in conditions such as fog, low light and rain. In fact, many brands recommend using rear lights to promote safer cycling as well as improve awareness among motorists.

If you considering that most cycling collisions occur during the day, it’s probably worth investing in a daytime running light (DRL) with multiple modes that can also serve as a night light. Most contemporary cycling lights offer varying degrees of brightness, battery life and flash patterns, and have a built-in DRL function — the output of which is measured in lumens.

Scroll down to see Cyclingnews’ roundup of the best rear lights available to buy this year, and jump here for our guide on what to look for in a rear cycling light

One of the brightest and most affordable options in the segment

The Moon Nebula is one of the lightest, brightest and most affordable rear cycling lights on the market. Rated at 180 lumens in its highest mode, the Nebula is incredibly bright which makes it an ideal option for those who spend a lot of time in the saddle during the day.

That said it does possess eight modes which differ in terms of brightness and flash patterns. The 20-lumen flash mode is the most economic setting providing a good balance between visibility and battery life, nearly 20 hours.

In terms of mounting, the Nebula can be fixed to the seat post, saddle and helmet in both a horizontal and vertical format. Everything from universal brackets, clips and rubberised o-rings are included in the package. This is an excellent overall rear light.

Ultra-compact in design, the Lezyne Zecto Drive Max is one for the minimalists

The Lezyne Zecto Drive Max might be one of smallest rear lights on the market but it’s also one of the hardiest units, too. Built to last, it benefits from a two-piece, plastic outer shell which mounts securely to the seat post via a rubberised band.

Each of the eight modes is controlled through the power button on the top of the unit — press and hold to switch it on or off and then a single click to scroll through each mode. The most powerful setting is the 250-lumen day flash, which is claimed to last an impressive nine hours, followed by the 125-lumen flash and 35-lumen steady blast.

The Zecto Drive Max also benefits from a nifty ‘mode memory’ feature which returns to the last selected mode each time the light is turned back on.

Interactive and smart, the See.Sense Icon2 rear cycling light has every base covered, including price

With a 300-lumen output, the See.Sense Icon2 uses both a high-powered CREE LED (visible from up to 3km away) and a CoB LED panel which gives a wide dispersion of light and 270-degree range of side visibility.

Like its forebear, the Icon+, the Icon2 connects to a smartphone through an app where you can customise the flash patterns and brightness as well as monitor the battery level. It can also be set up as distress beacon if you crash and an alarm in the event that your bike gets stolen.

GPS is used to alter attributes such as flash rate and brightness when approaching intersections and roundabouts or when cars are approaching by sensing the headlights. There’s also a new brake mode which provides a constant beam as you reduce your speed reverting to the previous setting as you start pedalling again.

A compact yet powerful light that punches well above its weight

Compact in dimensions, the Bontrager Flare RT is arguably the most comprehensive rear cycling light money can buy. Not only is it smaller and lighter than its predecessor, the new Flare RT is also 30 percent more powerful with a maximum output of 90 Lumens.

As a result, the Flare RT is visible from up to 2 kilometres away during the day on the most powerful setting. Four other modes ranging from steady beam to flashing are also available.

There’s a neat battery-saver mode that provides an additional 30 minutes of power when the charge drops to five percent, as well as Ant+ and Bluetooth Smart connectivity which means you can monitor battery life and control it from your Garmin computer.

Ideal for nervous riders or those who commute on dangerous and congested roads, the Varia RTL510 is a great piece of kit. It provides visual and audible alerts to warn of vehicles approaching from behind up to 140 metres and can be synced to a dedicated radar display unit or paired with a Garmin Edge computer.

In terms of battery life, the Varia RTL510 is on par with the Bontrager Flare RT with a maximum running time of 15 hours in flashing mode or 6 hours in steady- or night-flashing mode.

With 11 different output modes to choose from – including three constant modes, six flashing modes and two daytime flashing modes – the Strip Drive Pro caters for all types of riding conditions and disciplines.

Unlike its rivals, the Strip Drive uses an integrated cable-free USB stick for recharging purposes — a nifty feature but the chunky body housing can get in the way when mating it with certain laptops and charging devices.

At £28, nothing in the segment beats what the Dayblazer 65 offers in terms of value and all-round performance

Diminutive in design the Blackburn Dayblazer 65 is one of the most underrated rear cycling lights in the segment. Its narrow profile makes for an easy and snug fit thanks to a recessed, rubberised backing plate.

Burn times vary from 90 minutes to 6 hours, mode dependent of course but the two LED globes ensure brightness and visibility levels of the highest order — 65-lumens in high flash, and 50 and 30 respectively in steady and low strobe modes.

That said, if it’s something a little brighter and more powerful that you’re after, the Blackburn Dayblazer 125 is well worth a look.

One of the brightest, most adaptable rear cycling lights money can buy

The Rapid X3 is the most powerful rear cycling light in Cateye’s range, doubling the brightness of the company’s popular X2 with an output rated at 150 lumens (maximum power mode).

In this setting, the light will stay on for around one hour - not great by any stretch - but there are five alternative settings including a 30-lumen flashing mode that boasts a 30-hour battery life.

The X3’s narrow profile and rubber-band-style mount means it’s compatible with most bicycles and can be attached to any part of the frame including round and aero seatposts, seat-stays, handlebars and forks.

What to look for in a rear cycling light

As a rule, the brighter the light the better your chances are of being seen by other road users. It’s also worth looking for rear cycling lights that are durable, waterproof and capable of emitting a strong beam regardless of the time of day. Before making a decision, it's worth considering the following five factors as each one has a direct bearing on quality and price.

Lumens have become the gold standard to measure light output — the more lumens produced by a light bulb, the brighter the light.  As a departure point, 20 to 30 lumens are considered reasonable, but many rear lights have outputs upwards of 300 lumens. It is noteworthy that the advertised maximum lumen output is calculated in flashing mode, instead of constant mode, which tends to be slightly lower.

Most rear cycling lights feature universal silicon or rubber straps that wrap around and fasten onto your seat post. Some also come with special mounting brackets to attach to the back of your helmet, clothing or backpacks. Where you place it is up to you but the seatpost has become the standard mounting position for rear lights.

It’s important that your rear cycling light has at least two lighting modes: flashing and constant. The RVLR states flashing modes should pulse between 60 and 240 times per minute (1–4Hz) but there’s no clear indication as to which mode is most effective. As a result, many cyclists run both a flashing and constant rear light just to be safe, and some lights feature a pulse setting which consists of a constant beam with a pulsing brightness.

While there’s no set standard for battery life, most of the current options will easily last the duration of a ride — between 6-10 hours. Some may even last longer depending on the lighting mode selected and whether or not it uses ANT+ and Bluetooth Smart connectivity, the latter of which is prone to draining the battery.

There are a lot of cheap, poorly constructed and unreliable options out there. The last thing you want is a rear light that fails mid-ride, as it’s unlikely that you’ll notice right away. Therefore, it’s imperative that you invest in a rear cycling light from a reputable brand. While this might cost you a little more initially you can rest assured knowing it will last a good couple of years and often be covered by a warranty.