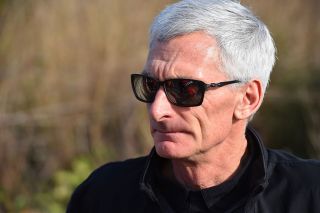 Allan Peiper has faced many hardships over the past few years (Image credit: Getty Images)

It has been a dramatic and an emotional year for Allan Peiper. Twelve months ago – almost to the day – he waved good-bye to professional cycling, and took a sabbatical as technical director at UAE Team Emirates. It wasn't clear if or when he would return to the sport he loved.

His final day on the job came at Paris-Roubaix and, while the iconic velodrome may have acted as a finish line to those competing on that warm spring afternoon, for Peiper it was merely the start of something far more important.

By that point, the then 59-year-old had been diagnosed with cancer for the second time in the space of five years, and once the team buses left Roubaix, the Australian headed home to begin the first of six intense rounds of chemotherapy. The early prognosis that he had received back in March was far from positive. The cancer had been detected in his prostate but had spread to one of his lungs and even his bones.

Over the course of his treatment, he would lose weight at an alarming rate. His hair would fall out and his limbs would go numb. Through it all, though, he kept faith. Self-isolation was a common theme and, even though he feared for his life, he rallied thanks to the support of those around him.

Riders – both past and present – reached out to offer support in any way they could and some of the touching messages from today's crop of WorldTour riders were a huge inspiration during Peiper's lowest moments. He fought and fought, later telling Australian journalist Rob Arnold that he had taken care of his body as if he was a pro again, and eventually he came through the other side.

A few months later, and with the cancer in remission, Peiper made a rare appearance at the World Championships in Yorkshire.

In a quaint little coffee shop in the centre of Harrogate, he sat with Cyclingnews and reminisced about racing and the months he had missed. His spirits were high, he talked passionately about coming back, and, for a brief moment in time, it didn’t really matter that he was a team boss and I was a journalist. It didn't matter that we were missing some of the racing. It was just good to have him back.

Six months on, and Peiper is back at home and enduring a different form of isolation. He's not sick, but the coronavirus has reached nearly every enclave of the globe and, because of his previous health scares and low immune system, he is all too aware of the risks. But he keeps healthy, both physically and mentally.

"At home there's a bit more space to take things in," Peiper tells us via the phone.

"We're lucky in that my wife and I have a garden. A lot of people don't have that space and aren't as fortunate, but here in Belgium we're allowed out with one other person as long as we stay two metres apart. You can go out with your family as long as you live in the same house, and the cops are being really good at enforcing that. I read this morning that we have 36 cases of COVID-19 in Geraardsbergen, so it's proof that it can get everywhere."

Most mornings see Peiper take an early walk of between 8-10 kilometres, although bike riding has been paused for now as longer forms of exercises were seen as too much of a risk.

"I had a couple of rough days," he admits. "The first days of lockdown, your life feels derailed. Your mind is still working full gas, so your fears and desires keep coming up. Once they subside, you get to a place where you can find time to reflect.

"But last week I was still a bit fearful of getting sick. I probably have a bit of a suppressed immune system because of my chemotherapy from last year. I was worried if I'd been in contact with anyone, but I was also worried about my job and how things might affect me and those around me. I came through that period because I realised that most of that is out of my control, unless I come into contact with someone who has the virus. But I've found some form of rhythm now and that's helped me in my day-to-day life."

Peiper has plenty of distractions at home to keep him busy, too. There's his ever-growing contingent of cats, which now stands at three, with the latest addition coming in the form of Sam – a local stray who has taken to their garden and the free food that's readily on offer.

The gender neutral name comes after the members of the Peiper household decided to call their first Mary. Months later, Mary turned out to be a boy but, by then, the name had stuck and so Mary, Philippe Gilbert – that's right, they have a cat called Philippe Gilbert – and now Sam keep Peiper occupied and entertained.

"Sam just kept coming back, and we kept seeing him eating out of Philippe Gilbert's food. He didn't seem to mind, so the new addition has just sort of stuck around," Peiper says.

'As a society, we have a real opportunity'

The cats, just like life at the moment, can be a handful, but Peiper takes it all in his stride. This morning, like most mornings, he has enjoyed some meditation and his regular walk, followed by a healthy meal. He often watches morning mass, he reads books, and he's even had the chance to explore some further educational training.

While most of the world is on fire due to the coronavirus, Peiper's home has become an oasis of isolation.

There has been an element of adjustment but Peiper's experiences over the last 12 months have left a man who was already humble even more grateful for what he has. His time for reflection has created a feeling of perspective.

"I've had five years of ongoing cancer treatment, with the biggest year being 2019 with the chemo. There were moments where I feared for my life," he says.

"That's probably helped me now because there was a time when my cell count was really low and I was on lockdown for two weeks last year."

That time in isolation, when Peiper was between bouts of treatment, has perhaps given the Australian the opportunity to look further ahead than most when it comes to the current pandemic. While many of us take to social media to complain about the trivialities of lockdown and the inconsequential materials we do not have at our disposal, Peiper is hoping that this moment in time can be used effectively to create a more positive future.

"That personal experience helped, but my concern is more about how we're going to move forward and how society can come through this together," he says.

"This is a real shake-up, but we have a real opportunity in that sense because I went out last night and the stars never looked brighter. People aren't travelling, the skies are clearing, and when you pause for a moment, you remember that, despite what's going on, the world is still a beautiful place.

"That gets drowned out by all the noise sometimes, and I know that at some point the cars will start up again and we'll be back to normal, but I hope that we've used this time to find a period of reflection in terms of how we live our lives."

Eventually, life for Peiper will return to normal. The last year has shown that nothing is predictable, and that health and happiness are so easily taken for granted.

In another 12 months, hopefully Peiper will be back at the races, and doing what he loves most.  And perhaps – who knows? – he'll have a fourth cat by then.