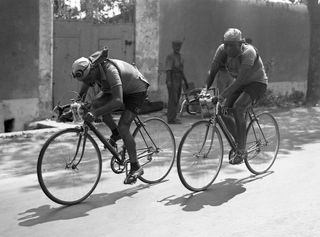 No Briton had started the Tour de France before Charles Holland and Bill Burl in 1937. Martin 'Cochise' Rodríguez was the first Colombian to line up in 1975, and Jonathan 'Jock' Boyer was the first American in 1981 – and let's not forget Canada's Pierre Gachon in 1937, even though he didn't complete the first stage.

So it's wrong to believe that Africa's under-representation in the world's biggest bike race results from a lack of history and culture. They ride the Tour well before riders from these so-called 'new countries', who have won the race in recent years.

Ali Neffati has remained in the history books as the first African to have ridden the Tour de France in 1913. It's kind of true, as he was from Tunisia, but in 1910, three natives of North Africa had already started the Grande Boucle: Raphaël Galiero, born in Blida, Emile Godard, born in Algiers, and Frédéric Vaillant, born in Mustafa.

All those three cities are located in Algeria, which was a department of France from 1834 to 1962, and therefore their nationality was French, whereas Neffati hailed from Tunisian capital Tunis, which was a protectorate since 1881, and he entered the Tour as a Tunisian.

He was one of the 'isolated' riders who didn't get the support of a team. He had been noticed by Henri Pélissier – the only French winner of the Tour de France from 1911 to 1930 (in 1923) – who crossed the Mediterranean to race Tunis-Sousse in the spring of 1913. Impressed by the 18-year-old Neffati, Pélissier convinced him to sign up for the Tour, and a group of famous Tunisian sportsmen organised a charity gala to finance his trip.

Because of his youth, his very dark skin and the fez he constantly had on top of his head – rather than the cap used by the other cyclists – he became the blue-eyed boy of race head honcho Henri Desgrange, who made sure he'd line up again in 1914.

Neffati abandoned on stage 4 and stage 8 of his two participations, respectively. He kept racing in France during World War I – being a Tunisian, he didn't have to serve in the French army, unlike the Algerians – after which he rode four successful Six Day campaigns in the USA, where his skin colour again bolstered his popularity.

Unfortunately, he often lost most of the big money he made in card games on the boat back from New York to Le Havre, so Desgrange offered him a job as a dispatch rider at the office of his newspaper L'Auto – now L'Equipe – when he retired from cycling in 1930. Neffati married a piano teacher from the Polish nobility, and their daughter Gisèle became a ballerina at the Paris Opera.

The regional teams of the post-war Tours

It was only after World War II that other North Africans took part in the Tour de France. It was the time when national teams and French regional teams filled the start list.

Their constant knocking at the door inclined later race director Jacques Goddet to welcome a team from North Africa as one of the regional squads. Cycling was a very popular sport in the French Algeria.

Zaaf and Dos Reis were united in the six-man team in 1950, along with Max Charroin from Morocco, Ahmed Kebaili, Marcel Molinès and Marcel Zelasco from Algeria. Indigenous Arabs and descendants of white settlers from Morocco, Algeria and Tunisia were equally considered North Africans and benefited from French nationality after it was promised in 1944 by the government of Free France (La France Libre) led by Charles de Gaulle.

So the big question is: was Molinès, born in Algiers in 1928 but definitely a French citizen after the second World War, the first African stage winner of the Tour de France? Or is it Robert Hunter, the first South African participant to the Grande Boucle in 2001, who claimed stage 11 to Montpellier in 2007?

In both cases, it happened in the same southern region of France on a very hot day.

On July 27, 1950, Molinès and Zaaf formed a leading duo with a 12-minute lead at the half-way mark of the stage. Zaaf tried to ride his teammate off his wheel, but crashed, got back on his bike and then took off in the opposite direction. Spectators sprayed him with wine. He was almost unconscious when journalists arrived. Because of the smell, they reported that he'd drunk wine, but this seemed unlikely because he was a Muslim.

Molinès won solo in Nîmes, but the first-ever North African stage victory was overshadowed by the extraordinary story of Zaaf's withdrawal. So was the double-up on the following day, when Dos Reis and Zelasco made it a 1-2 in Toulon with the native of Rabat, Morocco (from Portuguese parents but turned a Frenchman) in first position.

In 1951, two of the eight starters of the North African team (Charroin again, plus Kebaili, Zaaf, Zelasco, Marcel Fernandez, Manuel Mayen, Abdelkader Abbès and Vincent Soler, all from Algeria) completed the race, with Zaaf making the headlines again, this time for finishing last with the lanterne rouge.

In 1952, Kebaili, Zaaf, Zelasco, Fernandez, Soler, Mostefa Chareuf, Gérard Guercy and Henri Paret composed the last-ever North African team. Chareuf didn't make the time cut on stage 1 and would later be killed during the Algerian war, in which he fought for independence.

Two Algerians rode the 1953 edition for the South East of France team: Kebaili and Zelasco. Kebaili joined the same team again in 1954, while René Remangeon from Morocco entered the team of the South West. Fernandez was the last North African from the French colonial time to take part in the Tour, again with the South West team in 1955.

After winning the Tour de Langkawi in 2015, he made the long list at MTN-Qhubeka, the first-ever trade team from Africa to compete in the world's biggest bike race, but the management eventually selected Tyler Farrar for the ninth spot available.

Reguigui's dream vanished, as well as the hopes of cycling fans in his country and the desire of race organisers to attract the attention of the estimated five million French people who originate from North Africa, and mostly follow football.

Although Yohann Gène, from Guadeloupe, a French island in the Caribbean, is recognised as the first black participant, having ridden the Tour de France seven times for Europcar and Direct Energie from 2011 to 2017, history was made in 2015 when MTN-Qhubeka featured Eritreans Merhawi Kudus and Daniel Teklehaimanot, the latter wearing the polka-dot jersey until the first Pyrenean stage.

MTN-Qhubeka was a Professional Continental team granted a wildcard at the time, renamed Dimension Data and now NTT Pro Cycling.

The charity actions through Qhubeka remained, but the squad changed with the upgrade to WorldTour status and the recruitment of Mark Cavendish in 2016. In 2015, MTN-Qhubeka had a 23-man roster with 13 riders from North (Algeria), Central (Rwanda) and South Africa. Their nine-man Tour de France team comprised five Africans. In 2020, NTT Pro Cycling has only six South Africans and one Eritrean in their 29-man roster.

Since 2015, the African presence at the Tour de France has been constant. Ethiopia's Tsgabu Grmay has ridden it for three different teams (Lampre in 2016, Bahrain-Merida in 2017 and Trek-Segafredo in 2018) after he left MTN-Qhubeka.

Eritrea's Natnael Berhane, also a former Dimension Data rider, rode the 2019 Tour de France for Cofidis. Various teams from Australia, France, Italy, Bahrain, the USA and Kazakhstan have welcomed black Africans in the past decade, but they're yet to post outstanding performances in the WorldTour.

Two years ago, Rwanda's Joseph Areruya was set to be the next big thing from Africa after he won the Tropicale Amissa Bongo in Gabon and the Tour de l'Espoir in Cameroon but his stint in the pro ranks with Delko-Marseille is already over, and he is now racing as an amateur in the Caribbean.

Chris Froome's switch of nationality is perhaps the biggest regret for the African continent. He was a neo-pro from Kenya in 2008 until he opted for a British licence in May that year, just two months prior to starting his first Tour de France in Brest. However, he wouldn't have been the first African to wear the yellow jersey as Daryl Impey preceded him by two days in 2013.

Today, there are 14 male African professionals, 11 of whom are riding for WorldTour teams, while Ashleigh Moolman is flying the flag in the women's peloton as the current South African national champion.

The 21st century has so far represented a new era for African riders but, especially when it comes to the Tour de France, a lot of history is yet to be written.