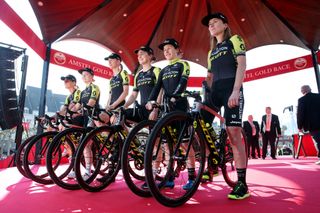 Mitchelton-Scott started in 2012 as the Orica-AIS squad – the sister team to the WorldTour men's outfit Orica-GreenEdge. Eight years on, the team has become one of the most powerful in the world, ranking third in the UCI World Ranking and fourth in the UCI Women's WorldTour.

The team is stacked with experienced riders including the road world champion, Giro Rosa winner and Liège-Bastogne-Liège winner Annemiek van Vleuten (37) and Tour Down Under winner Amanda Spratt (32).

Mitchelton-Scott started off 2019 in flying form, with Spratt taking the overall win in the Tour Down Under and stage wins by Spratt and Grace Brown. The results continued with Lucy Kennedy and Spratt on the podium in the Cadel Evans Great Ocean Road Race behind Arlenis Sierra (Astana), and a Kennedy and Spratt 1-2 at the Herald Sun Tour.

Annemiek van Vleuten came back from a knee injury in 2018 with a fourth in the Omloop Het Nieuwsblad before setting off on a dominant season with wins at Strade Bianche and Liège-Bastogne-Liège, two stages and the overall at the Giro d’Italia, and the Boels Ladies Tour prologue.

Annemiek van Vleuten: At 37, Van Vleuten shows no signs of slowing down and her utter dominance in solo attacks at the Giro Rosa and World Championships in 2019 demonstrate that she will again be a force to be reckoned with in 2020. Her goal will be redemption at the Olympic Games after her devastating crash in the road race in Rio in 2016. Expect Van Vleuten to continue fighting to be top of the pecking order in the Dutch squad for the Games and the World Championships by defending her title at the Giro Rosa and in the Classics.

Amanda Spratt: The Olympic year will also weigh in heavily with Spratt's season, considering she is arguably Australia's top climber and the Tokyo course will be well suited to her abilities.

Spratt might be second to Van Vleuten in the team, but still had stellar performances with a trio of Tour Down Under wins, second in the Trofeo Alfredo Binda, Durango-Durango and Emakumeen Bira, third at the Giro Rosa and the bronze medal behind Van Vleuten at the Worlds.

Lucy Kennedy: Kennedy, another climber, is often tasked with supporting the team leaders, but, when given the chance, she shows that she's among the best in the world with wins in 2019 at the Herald Sun Tour, Durango-Durango and San Sebastian, while in 2017 she won the Tour de l'Ardeche before joining Mitchelton-Scott.

The team is strengthened by the fact that the same riders have been together for several years – Spratt, Williams, Elvin, Sarah Roy and Jess Allen have been on the team since 2016.

In 2020, they add some fresh sprint talent in British rider Jessica Roberts and the multi-faceted Dutch woman Janneke Ensing from WNT-Rotor.

The team hasn't put much emphasis on its sprint train, leaving riders like Williams and Roy to prove themselves in smaller races while supporting Van Vleuten and Spratt in the major events. The team might not have the depth of Boels Dolmans or a dominant sprinter like Marianne Vos, but that's hardly a weakness with the kind of talents in the team.

The team also goes into 2020 with a doping case hanging over new signing Sophie de Vuyst, whose contract has been suspended pending the outcome of her case.

With most of the same riders in the team from 2019, expect similar goals and performances from the ever-consistent Mitchelton-Scott Women. Van Vleuten will be motivated to start off the season with wins in her new rainbow jersey, and the Australians, including Spratt, will be under pressure to earn selection for the Olympic team. The addition of Ensing will be the only wildcard.