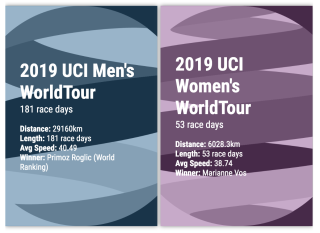 The 2019 road season is a wrap, and Cyclingnews takes a look back at the key moments of the year, the numbers and statistics that tell the story of all the season's racing drama.

From the UCI WorldTour where Richard Carapaz stunned with his Giro d'Italia performance, Primoz Roglic emerged as one of the top Grand Tour riders with his Vuelta a Espana victory, and Egan Bernal claimed an emphatic win in the Tour de France to the UCI Women's WorldTour where Annemiek van Vleuten dominated the Giro Rosa and Marianne Vos landed atop the overall rankings it was a year to remember.

Look back at all the stats and the winners of this year's top road events with these infographics and data visualizations.

This interactive graphic shows the average race speeds per UCI Men's WorldTour event, with the size of each bubble determined by the total race distance and the color by number of race days. The three Grand Tours in yellow are the biggest races of the year - the Tour de France overall speed was slightly above average for the WorldTour but the Giro d'Italia and Vuelta a España were slower than average, as one would expect for a three-week race.

The fastest race of the year was the sprinters' classic Gent-Wevelgem which ran at a whopping 45.9kph for almost 250km! The GP Montréal was the slowest at a plodding 35.65kph.

Hover over the dots to see more information about each data point.

The next interactive graphic shows the same information as above but for the UCI Women's WorldTour.

The quickest race of the season for the women was the 35.6km long Postnord UCI WWT Vårgårda WestSweden team time trial, where Trek-Segafredo won with an average speed of 48.68kph.

The following three animated graphics show the evolution of the General Classification of the GrandTours - looking at each rider who finished the race in the top 10 ranked by their gap to the overall race leader.

The Giro d'Italia, which began with a short individual time trial in Bologna won by Primoz Roglic provided an immediate separation in the standings, but on stage 7 a breakaway went clear and gained seven minutes, pushing all of the contenders down a notch but Roglic remained as best of the contenders. They narrowed the gap on the stage 9 individual time trial, and in the mountains on stage 14, Carapaz made his move.

The Tour de France started with a sprint stage won by Mike Teunissen, but the GC began to shake out on the punchy uphill finish to Épernay on stage 3. Julian Alaphilippe held the top position in the mountains on stage 6, the time trial on stage 13 and the Pyrenees and it was only in the Alps that Bernal was able to get away.

In the Vuelta a Espana, which began with a team time trial, the pattern was quite different, with Miguel Angel Lopez and Nairo Quintana taking spells in race lead before Roglic took charge on stage 10's individual time trial and never looked back.

This visualization shows that the Giro d'Italia Internazionale Femminile was the Annemiek van Vleuten show. After Canyon-SRAM won the opening team time trial, putting Katarzyna Niewiadoma in the race lead for four stages, Van Vleuten took charge as soon as the road tilted uphill on the Torri di Fraele.

Attacking at the base of the climb, Van Vleuten opened up a three-minute gap on her rivals and further extended her lead in the next day's time trial. From there, it was a fight for the podium with Anna van der Breggen clawing back a little time for second and Amanda Spratt in third.

For the elite men, Europe is still the centre of the cycling world, with France holding the most events by far, with 177 races between the UCI x.2, x.1, x.HC and WorldTour events. (National, Continental and World Championships are excluded from this analysis).

Spain comes in at number two with 75 races, while Italy has 74 and China holds 73 UCI road racing days for elite men. Belgium had the next most with 62.

The picture is very different for elite women, where Belgium has the most UCI race days at 27, followed by France, Italy, Spain and the United Stages. The Netherlands, who have arguably the best crop of elite women racers in the world, have the sixth most race days at 16.