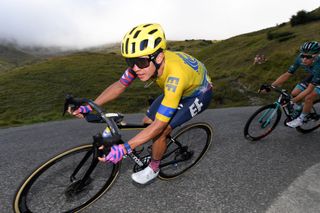 Cyclingnews' newest blogger, Sergio Higuita (EF Pro Cycling) is riding his first Tour de France and updates us on his personal emotions and feelings of his Grand Boucle debut.

My first Tour de France is only 11 stages old and already it has taught me a lot.

Every day I’m learning something new – about the race, about racing, about myself. I’m growing into it and feeling more and more myself every day.

A race like this makes you more mature. You learn about your limits. When you think you’ve reached a new extreme, you find a way to push past it. It’s a mental battle. Some days you get up and you can feel you’re not at full strength, but then your mind, almost involuntarily, picks up the slack and drags you forward. When the body is suffering, you can make such a difference with the mind.

Sergio Higuita blog: I used to picture myself in the Tour de France – now the dream has come true

We spoke ahead of the race about being three leaders at EF Pro Cycling, with Rigoberto, Daniel, and myself, but Rigo was always the one with the experience and the track record. Dani had bad luck with his crashes and he was quickly out of the GC equation, despite being so strong at the Dauphine. I crashed at the Dauphine, and like many other riders who also crashed, it has left a mark. But each day I’m fighting.

The approach now is that Rigo doesn’t lose time, and we keep him in the position where he needs to be, away from crashes and pitfalls. In the meetings each morning they give us our roles – which riders go for bottles, which riders need to be with Rigo at which kilometres, which riders go in the break. We can sense we’re part of the battle, and the GC is still in its infancy. I’ll be doing my best to give him the support he needs but I’m still looking for an opportunity to go in the break and try for a stage win, so hopefully in the final week that can happen.

The atmosphere in the team is still relaxed. Rigo is such a laid-back person, and he has a calming effect on others, too. He doesn’t really talk about winning the race or anything like that. He knows in cycling you have good days and bad days, and he always looks ahead. It’s a good thing, because he doesn’t waste energy worrying about things unnecessarily. When a leader is clearly anxious, they make their teammates anxious, and mistakes are made.

Rigo is someone who keeps the team motivated, but without actually saying all that much. He doesn’t boss us around at all – the orders come from the directors. He can handle himself and doesn’t expect too much of us. He often hangs nearer the back of the bunch but will choose his moment to move up. He’s a joker but he’s very focused here. I don’t know whether it’s because of the backdrop of the pandemic, but I think it’s the same for the other teams in that you do feel a certain tension out there. We have more of a chat and a laugh around the dinner table but actually, on the bus, it’s business mode, and we start to put everything in place and get switched on for the stage.

Going back to what I was saying about the learning experiences of my first Tour, there’s no better school than riding with Rigo. What I most admire in him is his ability to overcome adversity. He’s a rider who has always had a lot of talent but has also experienced more than his fair share of setbacks.

I remember that crash at Worlds in Florence in 2013… last year he broke his collarbone at Paris-Nice then at the Vuelta he had that horrific crash, but then only a few months later he’s up there again fighting for the Tour de France.

He gets knocked down, but he gets up again. That’s a quality I want to emulate – to be able to cope with difficult situations in that way. I haven’t had many so far – I’ve never broken a bone in my body – but I know there will be tough times, and it’ll be important to have that patience, not let the morale drop, and keep on keeping on.