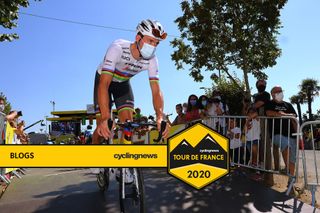 First thing, I’m still having fun at the Tour de France, and even though I’m yawning right now it’s all worth it because Richie Porte is up there on GC and finishing off all our hard work.

On stage 15 it was a crazy start and there were a lot of guys trying to get into the break and I was trying my best to do the same for the first 15km but I said to myself and the team that if a break hadn’t formed by that point then I’d sit up and move into my default role of protecting Richie as much as possible before the climbs started. With Bauke Mollema now sadly out because of his crash we’re fully committed to Richie and his GC ambitions.

If had managed to make it into the break on Sunday then the plan was to try and survive the first climb and then help take care of Richie for as long as possible because in the mountains it's all about protecting your leader and making sure that he doesn’t use up any unnecessary energy.

Mads World: No such thing as a rest day

Richie and I are building up a good relationship together. We did the Tour Down Under and Paris-Nice together, and while he wasn’t going for GC back in March, we used the Tour Down under to improve the way in which we ride together in the bunch. I took care of him as much as possible in Australia and that was a really useful experience and we’ve built up a level of trust now.

That means that when he needs to Richie can push his limits and follow my wheel on descents. In those situations, all he needs to do is look at my wheel and only touch his brakes if he sees my pads moving. It’s a role that I relish, maybe not when we’re on the climbs and tells me that he needs to stop for a piss. That’s a little bit annoying but I’m paid to do a job and if the directors tell me to do something then I’m going to carry out their instructions.

On a mountain day, there’s not much else for me to do, because if I’m not helping Richie I’m just going to sit in the peloton and get dropped at exactly the same point. It’s better to help him so he can save his energy. He’s finishing off all our hard work and as a team, we can’t ask for anymore.

On a personal level, I’ve had a couple of top 10 results on stages 10 and 11. It wasn’t originally the plan that I would sprint on the day we had some crosswinds because the plan during the team meeting was that I should be baby-sitting Richie for the entire day. In the end, though I saw a gap and I was trying to move up and help Jasper Stuyven.

It looked a bit stupid that we both ended up sprinting but that wasn’t the idea. I just wanted to help him move up but it was so noisy, and so frantic, that he simply couldn’t hear me when I came up and shouted for him to get on my wheel. That was a bit of a fuck up but we still got a couple of good results out of those days.

I know that I still have to work on my sprint though because on the day the team worked for me I lost his wheel. It’s a real pity because my legs have been in good condition and I’m still both strong and motivated, but hopefully one day soon I’ll hold the wheel and start my sprint from the front because both Jasper and Edward are both doing their parts perfectly.

In the last sprint, we missed Edward because he was looking after Richie, and that meant I didn’t have a guy from 1000 to 500m but that’s how it works in the Tour de France. When you come to a race like this with several objectives and goals you have to plan carefully over how you balance your efforts and your riders.

But now it's time to get ready for stage 16. I'm back on babysitting duty.