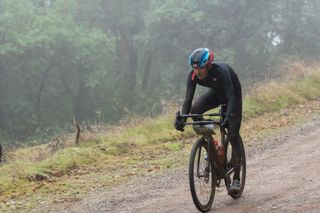 Organisers of The Mid South gravel race say weather can be the biggest adversary riders face over the 160km route that takes in the rolling dirt roads around Stillwater, Oklahoma, and Saturday’s running will likely see plenty of rain and the deep red mud that the precipitation creates.

Forecasts for the area call for rain early Saturday and temperatures hovering in the mid-50s Fahrenheit.

“When rain falls on Oklahoma red dirt, the roads become unforgiving and, in some cases, unrideable,” organisers say on the race website. “Stories of ruined derailleurs and miles-long sections of hike-a-bike through ‘peanut butter mud’ that can swallow a shoe have become staples of the experience.”

Coronavirus: The Mid South gravel race will go ahead as scheduled

Kiel Reijnen: Gravel is going to save American cycling

It’s exactly that type of challenge, however, that has seen The Mid South, formerly known as the Land Run 100, grow from 120 riders during its first year in 2013 to an expected crop of 2,700 hardy souls ready to take it on this Saturday.

The event offers cycling courses of 160km and 80km, plus a 50km running course. The pros, of course, will take on the 160km route, which starts in Stillwater at 8 a.m. and weaves through rural Payne County to the halfway point in downtown Perkins. From there, the course will take riders back to Stillwater. The course bottoms out at 800 feet of elevation and its highest point is just 1,129 feet, but the constant up and down of the course profile makes the challenge clear.

Organisers made the call last week not to cancel the race in the face of the coronavirus Covid-19 pandemic, saying they have been monitoring the situation and decided to move forward with the event given the current circumstances in Oklahoma.

In 2019, Payson McElveen took top honours in a three-up sprint ahead of former WorldTour road pro Ted King and Andrew Dillman, best known for his exploits in cyclo-cross. Nina Laughlin was the first woman to finish. McElveen covered the course in 5 hours, four minutes and eight seconds, while Laughlin won with a time of 5:32:30.

This year’s start list will see an entirely new cast of characters that includes Grand Tour riders and veterans of Paris-Roubaix and other road racing Classics.

Hoj, of course, has ridden Paris-Roubaix 10 times as well as other Monuments like MIlan-San Remo and Tour of Flanders. He’s also ridden all three Grand Tours and was the Danish road champion in 1998. Van Winden, who retired from Israel Cycling Academy after last season, has ridden Roubaix twice as well as Liege-Bastogne-Liege, Tour of Flanders, Milan-San Remo and Il Lombardia along with the Giro d’Italia and the Vuelta a Espana.