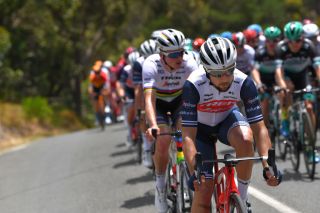 Kiel Reijnen leading the peloton at the Tour Down Under (Image credit: Getty Images Sport)

His chances of dabbling in gravel racing this year are as yet unconfirmed, but Trek-Segafredo's Kiel Reijnen is under no illusions as to how important the growing discipline can be in his native country.

The American told Cyclingnews that gravel could provide cycling in America with a renaissance moment.

"I think that gravel is going to save American cycling," Reijnen said at the ill-fated UAE Tour.

"Right now the road scene is disappearing, along with the teams and the races. Gravel gives us something to be hopeful about and to be excited about. I definitely hope that it creates a bit of a renaissance for American cycling."

Gravel racing has certainly exploded in America over the past few years with more events taking place and keen interest from the WorldTour riders, as the likes of Peter Stetina and Ian Boswell switched from the WorldTour to the dirt over the winter.

EF Pro Cycling have put together their own alternative calendar with riders like Lachlan Morton and Alex Howes lining up in events as varied as the Leadville 100, GBDuro, Three Peaks cyclo-cross and Dirty Kanza.

Reijnen took part in the latter last season, finishing sixth. However, while gravel has been growing, the US road scene has been decimated in recent years with races and teams folding. The Tour of California, which started more than a decade ago, was cut from the calendar this year, leaving the nation without a WorldTour event.

But despite the road racing landscape in the US, a raft of young American talent has moved into the WorldTour this year, with Quinn Simmons (Trek-Segafgredo) Ian Garrison (Deceuninck-QuickStep) and Brandon McNulty (UAE Team Emirates) all joining top teams in Europe. Reijnen welcomed the new generation but hinted that more could be done at home when it came to the strategic growth of the sport.

"Right now, it's true that when you have a big star interest grows, but I think that we could have done a better job with spending money on infrastructure and developing. That would keep the young crop of riders coming through.

"That's not to say that we don't have a talented generation coming through. I'm certainly old news and the young guys are in the headlines, and that's great to see. I'm thrilled for them, but it would be awesome to have 30 Americans in the WorldTour."

"What is it that the FBI says? I can neither confirm nor deny," he said. "The issue this year is that with the Olympics everything has shifted, so Kanza conflicts with the Dauphiné. As much as the gravel stuff is super important, the team duties come first. It remains to be seen, I guess, is the answer.

"I thoroughly enjoyed my experience and I'd love to be back, and I will be back, whether it's this year or not. It's a great event and I love supporting it, and if I'm not there in person then I'll certainly be there in spirit."

Further down the line, when Reijnen does consider his next move after WorldTour racing, a fuller schedule of gravel racing could well be on the cards.

"Sure, absolutely. That core group of friends, we've been racing together since we were 18 and I'd love to continue that."