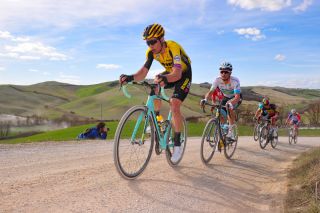 Wout van Aert (Jumbo-Visma) will re-start his 2020 road season with another bid for the podium in Strade Bianche on August 1, according to Sporza.

The 25-year-old made his first splash in top-tier one-day road racing at the Italian race in 2018, taking third behind Tiesj Benoot and Romain Bardet in Siena in only his second outing with Jumbo-Visma. In 2019, Van Aert rounded out the podium behind Julian Alaphilippe and Jakob Fuglsang.

The Belgian had a sparkling first half of 2019, taking second to Zdenek Štybar (Deceuninck-Quickstep) in the E3 BinckBank Classic before going on to win back-to-back stages at the Critérium du Dauphiné, the Belgian time trial title and stage 10 of the Tour de France in Albi.

Van Aert: Van der Poel has always motivated me to beat him

His season was interrupted by a gruesome crash in the Tour de France time trial in Pau, where the sharp end of a barricade tore open his hip capsule and thigh. He spent months recovering from the injury before a successful start to the 2020 road season, taking 11th in Omloop Het Nieuwsblad.

He will prepare for the Tour taking on a flat, fast Milano-Torino on August 5 before heading to the Dauphiné (August 12-16) before the Tour de France begins on August 29.

It is still uncertain whether Van Aert will defend his title in the Belgian time trial championship on August 20, but he will miss the UCI Road World Championships, as the men's elite time trial overlaps with the final stage of the Tour de France.

After the Tour, Van Aert will target Gent-Wevelgem (October 11), the Tour of Flanders (October 18) and Paris-Roubaix (October 25).