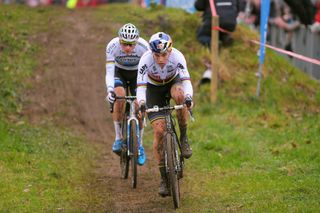 On Wednesday night, two of cycling's biggest names will face off once again, with Mathieu van der Poel (Alpecin-Fenix) and Wout Van Aert (Jumbo-Visma) resume their eternal competition against one another.

The pair will face off in the last round of the 'Container Cup', a 21-part series that sees Belgian sports stars and celebrities take on a head-to-head heptathlon competition held in a shipping container.

It's a novel idea, and has already seen the likes of Greg Van Avermaet, Victor Campenaerts and Jolien D'Hoore take part, with a 1500m walk, monkey bars, golf, a 1km row, a shooting competition, a bench press and 3000m of cycling on the menu. All while respecting social distancing rules.

That's what Van der Poel and Van Aert will face this evening but before resuming their rivalry, the duo took time out to speak to Het Nieuwsblad, facing questions about each other, the COVID-19 lockdown and the possible return of cyclo-cross in the winter.

Van Aert: Olympics postponement increases my chances of being selected

"When I saw our two names at the very end of the list of participants, I always knew it couldn't be a coincidence," said Van Aert. "It's a nice final of the Container Cup.

"From the moment I got on my bike, Mathieu has always made it difficult for me. He has always motivated me to beat him and that's how I got better myself."

The duo will be aiming to beat one another, but also Van Avermaet's leading time of 9:20, the Olympic gold medallist lying first overall, 28 seconds up on Oliver Naesen in second.

Van der Poel said that he didn't exactly miss his rival, but seconded Van Aert's thoughts on the pair pushing each other to improve.

"I wouldn't go that far," he said. "But I do miss our competition and being with colleagues. I've been racing against Wout for a long time and we have certainly pushed each other to a higher level over the years."

Earlier this year, the pair were set to kick off their Classics season at Omloop Het Nieuwsblad, though Van der Poel was forced to pull out days before after suffering from flu. Van Aert finished in 11th as compatriot Jasper Stuyven took the victory.

As it stands, the last time the pair faced one another in competition was at the cyclo-cross Worlds in Dübendorf back in early February. A return to road racing is likely in the autumn, assuming Europe's handling of COVID-19 pandemic goes to plan, with the two men set to meet at the 'spring' Classics.

Whether there will be an audience around to watch is another matter, and the same goes for the 2020-21 cyclo-cross season.

"For me, 'cross equals a multitude of people at the side. That's what makes the sport so beautiful, so I cannot imagine that it could be done without fans. But if I have to race without them then I'm not going to say no."

Van der Poel had a similar outlook, saying that he wouldn't enjoy racing an audience-free cyclo-cross season, but accepts that it could be necessary.

"This would make the charm of the 'cross disappear," he said. "If it turns out to be necessary, then it should be done. But I don't think we should go there."

The final round of the Container Cup airs in Belgium on satellite channels Play Sports and VIER at 8pm CEST.