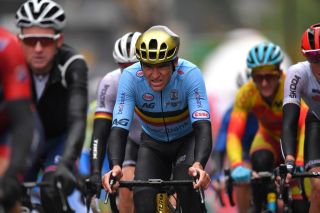 On paper, Belgium were unquestionably the strongest nation on paper, with a star-studded line-up and a solution to every situation. The Worlds, however, as the old cycling saying goes, are not ridden on paper.

This one was raced on sodden Yorkshire asphalt and the reserves of the band of Classics specialists drained away with the rainwater flowing into roadside gutters.

"When the favourites went, we were not there, so then there's only one conclusion: we did not have the legs," was head coach Rik Verbrugghe's blunt assessment to Cyclingnews.

"When you don't have the legs, you can say what you want, it's impossible to do anything."

Belgium's challenge had been blunted before it had a chance to begin. Philippe Gilbert, widely regarded as their chief threat, crashed at the bottom of Parliament Street on the approach to the first crossing of the finish line, with nine laps of the 14km Harrogate circuit ahead.

The 2012 world champion buried his head in his handlebars for a moment before grabbing a new bike and remounting with a grimace. 19-year-old debutant Remco Evenepoel was there to help him chase back on but they would never see the front of the race again. Some 20km further on, Gilbert made the call on race radio – his teammates raised the pace in the peloton and he rolled to the finish line and climbed off his bike in tears.

"I don't understand my crash. Suddenly I was there on the ground. Perhaps a flat tire caused me to lose my balance," Gilbert said.

"After the crash, the cold hit me and I had pain in my knee. I could still kick, but it brought up a lot of pain. It took too much out of me. It was impossible to go all the way back.

"Those tears are normal. I have worked very hard towards this. It's a great disappointment."

'Someone had to be in that move'

With Gilbert out of the picture, it was down to the Olympic champion Greg Van Avermaet, with Dylan Teuns and Tim Wellens handed free roles while Yves Lampaert and Oliver Naesen did the heavy lifting.

When the winner, Mads Pedersen (Denmark) attacked to bridge to Stefan Kung (Switzerland) to form the makings of the group that would go away to contest the finish, Naesen seemed to have things under control in the chase. Soon after, when Nils Politt (Germany) attacked with 36km to go, Teuns quickly leapt to mark it, briefly forming a four-man chase group.

However, just a couple of kilometres later came the first major attack from pre-race favourites, with Mathieu van der Poel (Netherlands) and Matteo Trentin (Italy) going clear. Teuns was caught and passed, Wellens went all-out to get across but was unable to get close.

Asked if missing that boat was a crucial error, Lampaert told Cyclingnews: "Yes. That's obvious if you see the results. Of course, someone had to be there. But then the legs are talking and there's nobody to do it. It's like that."

At that point, the race was far from over. There were still nearly 30 riders in the main bunch and the odds of Pedersen, Trentin, Van der Poel and co staying away were still relatively small. However, the team that had stressed the need to race on the front foot found themselves in chase mode.

Despite still having numbers, the gap to the lead group grew and grew, until the elastic seemed to snap just after the penultimate crossing of the finish line. That left Van Avermaet with a sprint for 8th place.

"It was a super hard race. I was completely empty in the finish like everybody else. I just tried to do my best, as good as possible, but I don't think I was capable of winning the race today," Van Avermaet told Cyclingnews.

"All the circumstances were super hard and I never had a great feeling but I was capable of doing a lot better than other riders in the race."

Asked if he thought about trying to go with Van der Poel and Trentin, he said: "No. I think if you have to go, you have to go with Sagan on the last climb. But then it was bridgeable anymore. It was too late.

"In the chase group it was super hard to make the difference. A strong group went ahead and on a parcours like this it's really hard to chase back. We still had some guys but it was really hard to catch them back – then I noticed it was not for the win anymore."

'No one helped chase'

Outside the team bus in Harrogate, Verbrugghe shepherded his riders towards team cars for the drive back to their hotel in York before giving his assessment to Cyclingnews.

"Straight away on the first lap we lost Gilbert and Evenepoel – two important guys. After that, we had to race a bit more conservatively and focus more on the finale," he said.

"For a moment there were four up front with Teuns, and that was a good situation, but then when Van der Poel and Trentin went, we didn't have the legs to follow. The strongest guys went to the front. That's it."

Having stressed the importance of being represented in each key move, Verbrugghe was disappointed to find his team "chasing behind the facts". He was also disappointed that they were, in his eyes, chasing alone.

"We had to do all the work. At that moment there was not really a team who helped us – not Germany, not France… Sagan is isolated so he can't help," he said. "But that's the Worlds."

The weather conditions, Verbrugghe felt, did not help, despite most of his riders being Classics specialists who are used to northern European conditions.

"We didn't have the riders in the team for those conditions," he said. "I think the best guy to support this weather was Gilbert and he wasn't there anymore."

Asked if he was disappointed in his riders, he said "not really", before summing up the day: "It was partly bad luck but also we quite simply weren't strong enough to follow the best riders."