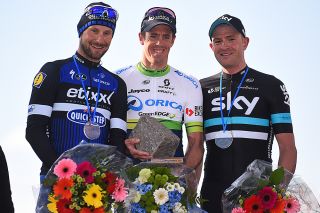 Mat Hayman's 2016 victory in Paris-Roubaix and Fabian Cancellara's incredible performance to win the race in 2010 topped the voting in round 2 of our reader poll to determine the best edition of the 'Hell of the North' in a Cyclingnews Twitter poll.

Hayman's unexpected win came only six weeks after the Australian fractured his collarbone and - in what should be an inspiration for our currently locked down peloton - he used Zwift to keep his form and motivation on the indoor trainer.

Cancellara's victory in 2010 was so dominant - he attacked with more than 50km to go - that it sparked accusations that he used a secret motor. His motor, he assured, was his legs and his powerful performance has made the semi-finals in our poll.

Tom Boonen's record-tying fourth Paris-Roubaix victory fell short in Round 2 to Hayman, much like that 2016 sprint. But the Belgian star will move on to the semifinals against the repechage winners, Boonen's own 2008 solo victory and Cancellara's first victory in 2006.