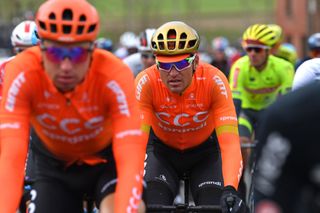 CCC Team's Greg Van Avermaet says that his 2020 season could restart as soon as August 1 with Strade Bianche as he looks towards participating in the rescheduled Tour de France, which is set to start on August 29, as well as likely targeting the Tour of Flanders and Paris-Roubaix, which have both been scheduled for October.

"I really like the look of the new calendar," Van Avermaet said on his team's website after it was unveiled by the UCI on Tuesday. "It's busy, but I think for a rider like me, there is a fairly clear programme, starting with Strade Bianche.

"If you're a GC rider, then you probably have more decisions to make," he added. "It's a shame that there are some key overlaps, as I'll be at the Tour de France, so I won't be able to do the Canadian races [GP de Québec and GP de Montréal WorldTour events on September 11 and 13], and races like Amstel Gold and Gent-Wevelgem, which are on the same weekend [October 10 and 11].

"But I can't complain," said Van Avermaet. "This season is unprecedented, and I think all of the parties involved have done a good job to create a balanced race calendar.

"Now, we just have to wait and hope that the situation with the pandemic gets better and that we'll be able to race and travel between these races. I'm happy I have something to motivate me in the coming months, and I know we will all be ready to race as soon as we have the green light."

In recent weeks, Van Avermaet has had to field questions from the Belgian press, in particular, about his team's finances. The team's riders are already on reduced salaries, like a number of other teams, while some members of the squad's staff have been laid off. It was reported last week that the riders had been asked to take a further salary reduction.

"We're being kept well informed and hopefully there will be a solution. The stores in Poland will open again next week, which may help our sponsor to continue to support our team," he said in an interview with HLN.be and VTM Nieuws last week. "In any case, my focus is on my team, on survival. That's the most important thing."

Meanwhile, Van Averamet's new CCC teammate Matteo Trentin – who joined the Polish WorldTour team for 2020 from Australian outfit Mitchelton-Scott – is remaining optimistic that the racing will happen on the proposed dates.

"Finally, we have something to properly work towards, and we know when we have to be ready," the Italian said after Tuesday's calendar announcement. "We can start to set our own goals for the rest of the season.

"Let's be positive and say that this is the proper calendar that we're going to race, and if everything keeps going the way it is, we can hopefully do it all. How the situation has evolved in the past month has been more positive, and let's hope this trend in a few countries will continue, and we can isolate this virus and work towards restarting the cycling season," Trentin said.