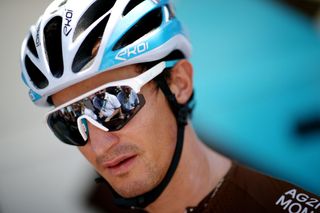 AG2R La Mondiale announced they have renewed their contract with 31-year-old Alexis Vuillermoz, winner of a stage in the 2015 Tour de France. The Frenchman said he was touched by the team's confidence in him.

Vuillermoz won the Royal Bernard Drome Classic in 2019 and led AG2R La Mondiale at the Giro d'Italia. He has not raced since finishing 41st in last year's Tour de France after breaking his kneecap in a training incident last August.

"I am touched by this sign of confidence that Vincent Lavenu and the staff of the AG2R La Mondiale team have shown me. I am coming out of two complicated seasons," Vuillermoz said in a press release.

Vuillermoz rues lost year but is ready to race again

"I fractured my kneecap in August and I haven't raced since the Tour de France finished last July. I was looking forward to resuming the season in March at the Volta a Catalunya, but of course the pandemic prevented that. Despite everything, the team trusts me enough to sign me for an additional season and this illustrates their human dimension.

"I have been part of the team for six years; I have seen it grow and evolve so I am proud and happy to continue the adventure."

Vuillermoz had bad luck over the past few years - crashing in Tirreno-Adriatico last March and injuring his hamstring. In 2018, he fractured his shoulder in a crash at the Tour de France and dropped out before stage 10, he suffered a fractured vertebra in a automobile accident in 2017 and a head injury in a crash during Amstel Gold Race in 2016. But perhaps his most bizarre fall was in last year's Giro d'Italia when he suffered an asthma attack on the Mortirolo and fell into a ravine.

Team manager Vincent Lavenu said Vuillermoz is a rider he can count on to perform.

"Alexis is a good guy and even if these past two seasons have been disrupted by injuries, we know we can count on his strength, his punch, and his panache. He has been wearing our colors since 2014 and is one of the riders who embodies the soul of the team. We are delighted to be able to continue our adventure with him," Lavenu said.

Vuillermoz said he is still hoping that the Tour de France can go forward and is aiming for selection to AG2R La Mondiale's team for the race, which was rescheduled for August 29-September 20.

"I am pleased that we will be able to resume the season because we have sometimes wondered whether we would end up having a blank season. Taking part in the Tour de France in August would be a strong signal for our sport, but also for the entire country. I really hope I can take part."