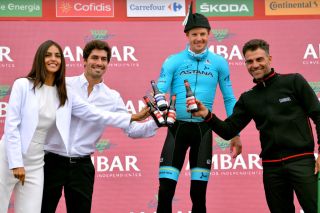 Jakob Fuglsang waited a long time to seize victory in a Grand Tour, but the 34-year-old Dane did it in grand fashion Monday during stage 16 at the Vuelta a Espana, emerging from a disintegrating breakaway group and soloing to the win atop Alto de la Cubilla.

Watch all the action below.