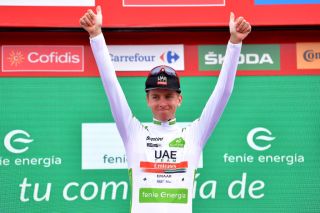 The breakthrough racer of this year's Vuelta a España, Tadej Pogacar (UAE Team Emirates), says he hopes to complete his first-ever Grand Tour on the podium in Madrid.

Pogacar intends to play a defensive game on the five days remaining of the Vuelta a España. However, he told the press that if there should be an opportunity to attack, he will take it.

Just 20 years old and already the winner of two stages and the current leader of the Best Young Rider's competition, Pogacar is currently lying in third place overall. He is sandwiched between runner-up Alejandro Valverde (Movistar Team), who is 56 seconds ahead, and fourth-placed Miguel Angel Lopez (Astana Pro Team) only 17 seconds behind.

It's a tricky situation to be in, but Pogacar seems to be handling it well, taking things as they come and not getting overly stressed about it all.

"My objectives were to learn as much as I can and get from this Vuelta as much experience as I can," Pogacar said.

"But sometimes things turn around, and I grabbed the chances I had and it's great for our team that we can bring something good to Madrid.

"Now I'm currently on the podium and in the white jersey, for sure I want to keep that [the white jersey] in Madrid and for sure I will ride 100 per cent in defence of it. But if an opportunity comes to attack, I will take it. It will be a fight until the end."

Looking ahead at the next five stages, Pogacar says that every day has its own complications. Wednesday's stage 17 is the longest of this year's Vuelta at 219 kilometres and is completely flat. It has been largely overlooked as the showdown mountain stages west of Madrid loom large on the horizon.

Pogacar pointed out that on Wednesday there's the risk of crosswinds on the exposed plateaus of central Spain. Then, of course, there are two tough climbing stages to come on Thursday and Saturday and a tricky stage to Toledo on Friday, finishing on a cobbled uphill.

"Probably there will be a lot of attacks, but that's racing. I will try to defend myself," Pogacar said. "I don't think Roglic will crack. If something goes wrong for him, then maybe Valverde will win, but I don't think that's going to happen. And for me, Lopez is more of a threat than Valverde."

Pogacar's season will be almost over after the Vuelta a España but not quite. The Slovenian will represent his country first in the mixed team relay event and in the road race at the World Championships. He will the conclude a successful season that has included a win at the Tour of the Algarve and the Tour of California, as well as his spectacular latest performance in the Vuelta a España.

And next year? "I have no idea, let's get this season out of the way first."

His participation in the Tour de France at some point in the future seems likely, but then, Pogacar says, "there's also the Giro d'Italia."

And although GCs in stage racing appear to be his greatest strength for now, Pogacar says he'd like to return to the  Classics again next year.

"We will see, you can't do everything," he points out. But at the moment, in the Vuelta, Pogacar's achieving far more than anybody could have expected  - and that bodes well for the future.