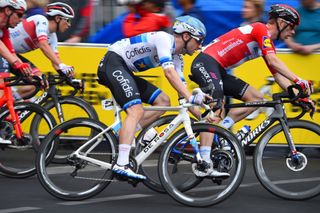 Elia Viviani has travelled to Livigno in the Italian Alps for a month of altitude training in hope of hitting an early peak of form for Milan-San Remo on August 8.

In the last few days, Viviani trained with several Cofidis teammates on the Côte d'Azur in southern France, working on his lead-out train and sprinting, studying the opening stage of the Tour de France around Nice and then completing a final seven-hour ride on Monday dedicated to a detailed reconnaissance of Milan-San Remo.

"It was good to get together with the team. After spending much closed-up at home it's important to work together," Viviani told La Gazzetta dello Sport.

Viviani: A month on the home trainer is enough to drive you crazy

Viviani will kick-off the rescheduled season at Route d’Occitanie in southwest France before targeting Milan-San Remo. He will join forces with Laporte and GC rider Guillaume Martin in the Cofidis line-up for the Tour de France, with a final decision still to be made on whether he will target the Classics in October or the sprints at the Giro d'Italia.

"I did two great training sessions: one specifically for the lead-out train and sprints, the other to study Milan-San Remo, and especially the Poggio, at race pace. It's going to be a crazy race on August 8. It'll be just my fifth day of racing and probably for everyone else too. It'll be very important to be fit and ready. If you're behind on your form, you'll never catch back up."

The Italian summer finally arrive at the weekend with temperatures touching 30°C on the coast. Similar, if not higher temperatures can be expected for all the races in August.

"The heat can help the sprinters because when it's really hot, everyone suffers more. We're going to see some spectacular racing," Viviani predicted.

Viviani will spend close to a month at altitude, staying in the small village of Trepalle – near Livigno – at 2,069 metres, the highest comune in Italy.

"I know after doing a big block of altitude training for the track that it helps me. It's the last part of my training and after two weeks some of the team will join me to work together. I'll head down with ten days to go to my first race, to do some moto-pacing work on the road and on the track."

Viviani has yet to win a race in his debut season at Cofidis, having joined from Deceuninck-QuickStep. Cofidis will hope that Viviani can end the French squad’s long drought at the Tour de France. The team’s last stage victory at the race came in 2008, when Sylvain Chavanel won in Montluçon.

“This year I’m leader of Cofidis, a French team, so the priority is the Tour,” explained Viviani. “But I'd like to return to the Giro with the spirit of 2018: at full throttle from start to finish with the maglia ciclamino on my shoulders.”