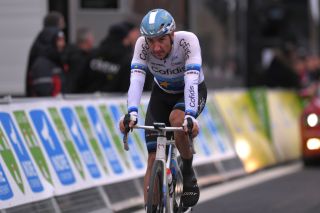 Elia Viviani (Cofidis) has admitted that training indoors on a home trainer can be a maddening experience but he is firmly opposed to the idea of competition resuming behind closed doors during the coronavirus pandemic.

With Italy under lockdown, Viviani has been unable to train on the road around his home in Udine since he returned from Paris-Nice on March 13. Like much of the WorldTour peloton, the European champion has instead been compelled to maintain fitness on his home trainer.

“I’m not sure if anyone can stand it. It’s already hard after one month, it’s enough to drive you crazy,” Viviani told Leggo when asked if he could continue to train in that way for three months or more.

“You’re alone, in a small space. It’s completely the opposite of racing and training in the open air. Sweating and suffering on the rollers at home is very different.”

The Spring Classics, Giro d’Italia and Tokyo 2020 Olympics have all been postponed due to the COVID-19 pandemic and it remains unclear when or indeed whether professional racing will resume this season.

Last week, the UCI suspended all competition until June 1, though it seems likely that the hiatus will extend further, with the Critérium du Dauphiné (May 31-June 7) postponed and the Tour de Suisse (June 7-14) cancelled altogether.

Tour de France director Christian Prudhomme, meanwhile, has downplayed the idea that the race could proceed behind closed doors if strict measures on public gatherings and movement continue into summer.

Viviani expressed his opposition to racing behind closed doors.

“I hope not, because cycling behind closed doors would be a big mistake,” he said.

“And I’m not saying that only for the fans: with a bit of sacrifice, they can watch the races from home. I’m saying that because if they wanted to race behind closed doors, it would mean that the pandemic hadn’t been completely eradicated. In that case, it would be better to stay at home.”

The Olympic Games, Euro 2020 and Wimbledon are among the high-profile sporting events to be postponed or cancelled due to the coronavirus pandemic but the Tour de France remains on the calendar for the time being despite the stringent measures against COVID-19 currently in place in France.

The IOC received criticism for waiting until recently to postpone the Tokyo Olympics, but Viviani said he see the rationale behind ASO’s delay in making a decision on the Tour.

It has been reported that a decision on the Tour will be taken by May 15 and Le Parisien has suggested that the race could be delayed by a month and so held between July 25-August 16.

“I understand that this doesn’t come across very well, but even though it’s not a popular choice, it makes some sense,” Viviani said of ASO's delay on a decision.

“The Tour starts on June 27, right on the limit of possible postponement. They’re waiting, it won’t be an easy decision.”