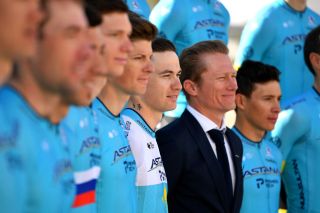 Astana team manager Alexander Vinokourov has picked holes in reports of alleged links between Jakob Fuglsang, Alexey Lutsenko and banned doctor Michele Ferrari, telling L'Equipe that "the story doesn’t stand up" and that it is "based on absurd rumours".

Vinokourov is a former Ferrari client but always claimed he was only coached by the Italian doctor. He served a two-year ban for blood doping after being caught at the 2007 Tour de France and then returned to win the 2010 Liège-Bastogne-Liège and the London 2012 Olympics road race, before becoming general manager of the Astana team.

According to a detailed 2014 report in La Gazzetta dello Sport, Italian police in Padova discovered links between a number of Astana riders and Dr Ferrari but these were denied by Ferrari and the team continued to secure a WorldTour licence.

CADF's report cites intelligence that Ferrari was present at the 2019 Volta a Catalunya with Astana, and met with both Fuglsang and Lutsenko during the year. A further eyewitness account cited by Politiken states that Ferrari had motor-paced Fuglsang in Monaco.

These allegations, if proven to be true, would fall foul of the WADA Code, specifically Article 2.10, which prohibits athletes from associating (which includes obtaining training or other advice) with any 'athlete support person' currently serving a period of ineligibility.

On Monday, the Astana team said they do not "collaborate with any suspicious doctor, such as Dr Michele Ferrari" and highlighted that "the licence of Astana Pro Team has been renewed for the year 2020, confirming the full compliance by the team with all its obligations, including in terms of the fight against doping in cycling."

Fuglsang and Lutsenko also denied any connection to Dr Ferrari.

"I contest that I have met with Dr Ferrari," Fuglsang wrote on Instagram. "I am not aware of any report and I can confirm no procedure has even been opened by competent anti-doping authorities against me. Accordingly, I have no case to answer. I am extremely concerned that such rumours could be spread out in the press."

Vinokourov picked holes in the reports by Politiken, VG and DR.

"How can anyone imagine that Michele Ferrari would pass unobserved if he came to the Volta a Catalunya? Everyone in the peloton would recognise him straight away, we all stay in the same hotels.

"Also, why would he come to that race if nether Jakob or Alexey weren't there? Everything is based on absurd rumours. We haven't been contacted by the CADF and we're obviously ready to work with them and with the UCI to find out the whole truth."