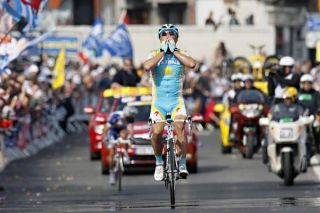 Belgian prosecutors in the case surrounding Alexandre Vinokourov's alleged bribe to Alexandr Kolobnev at the 2010 Liège-Bastogne-Liège, have called for both former riders to be fined and jailed for six months.

According to L'Equipe, prosecutors in the case are also calling for Vinokourov to be fined €100,000 and for Kolobnev to be fined €50,000, as well as €150,000 being confiscated from Kolobnev's bank account.

The allegations were first made in 2011 when Swiss magazine L'Illustré reported that Kolobnev had been paid by Vinokourov, and published email exchanges between the two riders after the race. Both riders deny the accusations.

Kolobnev retired from the sport at the end of the 2016 season, while Vinokourov retired immediately after the 2012 Clasica San Sebastian, having won the Olympic road race in London two weeks earlier, and is now the general manager of WorldTour team Astana.

Vinokourov was banned after testing positive for blood doping at the 2007 Tour de France, but resumed his career in 2009, after initially saying he'd retire, and went on to win a stage at the 2010 Tour, as well as Liège and the Olympic road race.

A final ruling on the case is set to be announced on October 8.