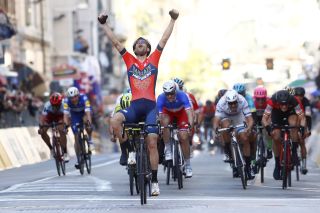 Vincenzo Nibali is experienced enough to know that fretting over victory in Milan-San Remo, and the countless scenarios in which the race can play out, is a thankless task.

Of course, part of the pressure eases when, as Nibali has experienced, you’ve already won the race but the Trek-Segafredo rider will be taking a relaxed approach when he lines up for the first Monument of the season on Saturday morning.

The 35-year-old returned to racing at Strade Bianche and despite crashing out with a hand injury he bounced back with fifth in Gran Trittico Lombardo and 26th at Milan-Torino.

While form might not be stellar, the Trek Segafredo leader remains a threat. Experience, coupled with the fact that teams have been reduced to six riders, and the slightly unfamiliar nature of RCS’ altered route, all weigh in Nibali’s favour.

"In 15 years of professional racing, I’ve competed in all these races, and some, like Sanremo and Lombardia, I’ve rarely missed them," the 2018 Milan-San Remo winner said on the eve of the race.

"Milan-San Remo is the race that, for its charm and history, I’ve always wanted to race, even if it’s one of those that I see as least suited to my characteristics. I consider it the Classica for fast wheels. Despite this, I’ve always tried to invent something: attacks from afar or close to the finish line, or attacks on uphills or downhills.

"After so many placings, I had almost put my mind at rest. And the year I didn’t look for it, it was the race that came to me. When I won, I crossed the finish line laughing. The victory came as an unexpected gift."

RCS Sport have been forced to alter the Milan-San Remo route several times in recent weeks, with the final version tweaked just a day before the race. The Cipressa and Poggio remain but large portions of the coastal roads have been removed, while pundits and riders believe that the addition of a new climb in the second half of the race could tip the race towards riders like Nibali, and away from the sprinters. Few riders will have had the chance to properly recon the route, but the finale remains intact.

Nibali claims that he has only looked at the route on paper and that his backroom staff will offer key advice on any critical sections.

"Honestly, I only looked at the new route on paper, and I can’t say I’ll study it. For Saturday, I will treasure the advice of the team and the people I trust who have seen it, even if only by car. My approach won’t change," he said.

"Milano-Sanremo remains the longest Classic, and I want to perform well. Therefore, it is important to take care of every detail: from feeding during the race to managing my positioning at key moments, which is crucial to saving energy.  Other factors are unpredictable, even more so this year considering the heat."

Nibali’s entire racing programme is based on home roads this season, with the Giro d’Italia his major objective later in the autumn. On Saturday, he will have the chance to win a fourth Monument, and who knows, maybe the veteran rider will have the last laugh once more.

"Racing in my own country is just one more incentive for me to do well," said Nibali. "I’ve never suffered from pressure or expectations, quite the contrary. During my career, I have always raced at home with great pleasure. From a technical point of view, Italian races are always demanding and fascinating.

"I don’t think I’m exaggerating when I say that Italy has some of the most beautiful races in cycling’s history. Cycling has deep roots in the Bel Paese. Many of these races have been a hard-knocks school for many riders, including myself."