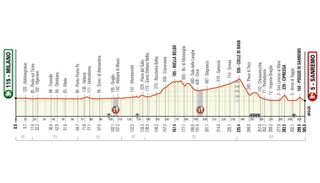 Milan-San Remo is always a long day in the saddle but the rescheduled 2020 Monument got six kilometres longer thanks to another change to avoid Alessandria. Race organisers RCS Sport noted that "The route had to be modified because of the heavy thunderstorms that struck Alessandria in recent days. Accordingly, the route will be extended by 6km."

Now at 305km, this year's race will be the longest course of 111 editions of Milan-San Remo.

After leaving Milan, the route normally runs south and crests the Passo del Turchino before heading along the Ligurian coast from Genoa. However, the mayors of a dozen coastal towns along the Italian Riviera on the route refused to close down their roads during the peak of tourism season.

That meant a first reroute for Milan-San Remo, lengthening the course to 299km plus a 10km neutral ride out from central Milan, adding the climbs of the Niella Belbo and four-kilometre Colle di Nava before rejoining the classic route at Imperia.

The newest change adds a six-kilometre detour to avoid Alessandria, bringing the total distance to 305km in addition to the neutral 10km stretch out of Milan.

The UCI rules impose a maximum distance for elite men's races of 280km for the Olympic Games and World Championships, 240km for Continental and National championships and 200km for 1.Pro, 1.1 and 1.2-ranked races, but the Pro Cycling Council is left to decide how long WorldTour races can be.

Milan-San Remo organisers already received an exception to reduce the team sizes to six riders in order to allow two Italian Pro Continental squads - Androni Giocattoli-Sidermec and Bardiani CSF Faizané - to be added while the start list remains inside the maximum 176 riders for WorldTour races.

While the weather is predicted to be much nicer than the race usually has been in March, with sunshine and 30°C in the forecast, it will mean a lot more fetching bidons. There are two feed zones along the route, one after 102km and another after 192km.