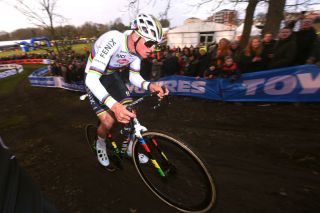 Mathieu van der Poel will start the UCI Cyclo-cross World Championships in Dübendorf, Switzerland this weekend – his final outing of the season – as the overwhelming favourite to take his third world title.

As was the case at the European Championships in Italy, the Dutch leader will once again have the massed ranks of the seven-man Belgian squad – including European silver medallist Eli Iserbyt, UCI World Cup champion Toon Aerts, and his longtime rival Wout Van Aert – battling against him.

But if he's feeling the pressure – and after 23 wins from 24 races in 2019-20 he probably isn't – then the 25-year-old is not showing it with two days to go until wheels hit dirt in Switzerland.

"The run-up to the World Championships remains special because the race is so unique," he told Sporza at a pre-race press event in his hotel near Zürich.

"The nerves are less and less as the years pass and I'm happy about that. I feel really relaxed. Nerves are not going to kill me."

The news can only be ominous for his rivals on Sunday, who face the prospect of an unflappable rival who could ride off into the distance at any time. It's not a revelation, but better the devil you know doesn't really apply when the devil is near unbeatable.

At the same press event, Van der Poel told WielerFlits that he wasn't at his best this winter – where a third place at the DVV Trofee in Ronse is the only blemish on a perfect record, mind – and that his 'cross season has been built around peaking for the Worlds.

Van der Poel's calmness and confidence extends to his preparation for the weekend, too. The Dutchman readily admits that he hasn't ridden the course at all yet. By contrast, the Belgians were out reconnoitering the flat and fast course on Friday afternoon.

"That doesn't happen until Sunday morning, like I do with other crosses," he told Het Laatste Nieuws. "I expect it could change a lot with the weather and other categories racing on it."

Rain showers are predicted for the weekend, and, should they come in large enough quantities, the speedy grass course could be churned up into a mudfest come Sunday afternoon.

But, regardless of the weather, Van der Poel has a plan, and it likely won't be a case of speeding off on the opening lap, as he's done so many times in the past.

"I don't necessarily have to ride away from the start," he told HLN. "I can easily wait until halfway, as I've done many times this season. Or even wait until the end. I hope it doesn't come to a sprint, but even that can be a weapon."

One rival stands above the rest, he added. However, it's not his 'old' rival Van Aert, who isn't yet at 100 per cent fitness after recovering from his horrific thigh injury sustained at last year's Tour de France.

Instead, Toon Aert is the man Van der Poel has singled out. The powerful Belgian, who is bang-on form and clinched the UCI World Cup at Hoogerheide last weekend, has a strong argument for the second-best rider in 'cross this season, along with teammate Eli Iserbyt. And given the nature of the course, it's that power that marks him out as a threat, said Van der Poel.

"From what I can estimate at the moment, Aert will be my biggest rival," he said. "The toiling on those hard, straight sections – that's all Toon."

Van der Poel will certainly have a fight on his hands on Sunday afternoon. It's one he seems destined to win, but we'll have to wait two days to find out for sure.