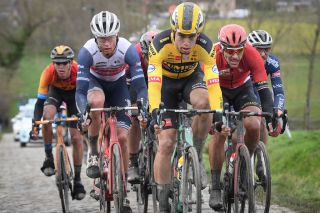 Classics star Wout van Aert has spoken about the Covid-19 coronavirus and its heavy effect on his spring race schedule so far, noting that his rivals at Paris-Nice have an advantage on him.

The Belgian was due to race Strade Bianche and Tirreno-Adriatico before organisers RCS Sport were forced to cancel both in response to the outbreak in Italy. His Jumbo-Visma team then pulled out of Paris-Nice, citing a "lack of adequate guarantees about the procedures to be followed" in case of an outbreak at the race.

Van Aert told VTM News that, while it's not easy to be forced to miss races, there are worse things about the virus than having disruption to the racing schedule. He added, though, that his Classics rivals at Paris-Nice will have stolen a march on him in terms of preparation for upcoming races.

Stuyven: 90 percent of Paris-Nice peloton assumes that we will not get to Nice

"Of course, there are far worse things than that," he said. "But still, races are often won mentally and that's what preparation depends on. As a top athlete, having to change things at the last minute is not easy. As far as that's concerned, the guys who are riding Paris-Nice this week have an advantage.

"Strade Bianche was a target after I had been on the podium the past two years. Then we aimed at Paris-Nice – Mike Teunissen and Amund Grøndahl Jansen and myself would've been added to the squad. I was looking forward to it, but it became another sacrifice."

With a month's worth of Italian races cancelled, the Tour de Normandie joining them on Wednesday morning, and Paris-Nice racing 'behind closed doors', the prognosis for March and April's races looks increasingly negative.

Last week, Flanders Classics CEO Tomas Van Den Spiegel said that "everything is on as planned", while the Volta a Catalunya could be raced behind closed doors too, and Trek-Segafredo rider Jasper Stuyven said on Tuesday that few riders in the peloton are confident that Paris-Nice will reach the finish.

"Do I fear for the top classics in my own country?" said Van Aert. "I think one-day races are something different to stage races where you sleep in hotels. I'm trying to stay positive, in any case."

But despite missing out on multiple races already this spring, Van Aert has been happy with the team's decisions to pull out of races in Italy – before they were cancelled – and France.

"I don't know enough about the dangers, myself," he said. "Of course, I would prefer to race, but I'm happy that the team management doesn't go blind and can see the dangers.

"We don't want to get stuck somewhere – a quarantine would really jeopardise our spring.  That's why I respect the team's decisions."

Van Aert, who has only competed at Omloop Het Nieuwsblad so far in 2020, is set to race next at the GP Denain and Bredene Koksijde Classics on March 19-20.