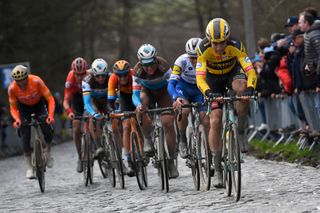 During the kick-off of the Spring Classics campaign at the Omloop Het Nieuwsblad in Belgium, the Jumbo-Visma team confirmed that they’re ready for the upcoming battles. At a stormy edition of the Omloop, the Dutch team did, however, leave the race empty-handed.

The team's two Classics specialists made their season debuts. Wout van Aert showed several glimpses of great form but he was was boxed in by race tactics in the main chase group.

Meanwhile, the team’s rider in the front group, Mike Teunissen, found himself running out of gas and was dropped from the lead group on the race’s key obstacle, the famous Muur van Geraardsbergen. It was a missed chance.

Shortly after the race, both Teunissen and Van Aert talked to the gathered media who were standing outside the Jumbo-Visma team bus in chilly Ninove, together with a big group of fans.

"It was a hard race," Teunissen said. "There were parts where we rode 60 km/h and then suddenly 20 km/h. Everybody had to work hard to feature in the finale. If that’s the first time in the season you’re racing then it ends up being more difficult than expected.

"It was frustrating that we rode such a good race with the team and ended up with a 6th and 11th place. It was a big chance. The legs felt really good but at one point it started going worse. It’s my first race of the season. That didn’t help. At a certain moment I realized that other riders in the lead group were better.

"About 30 kilometres from the finish, I told the guys to go ahead and try something. I tried to save some energy in the lead group. The gap was too big though and they were unable to close it back down. I tried to make the best of it. Then again, once you feel that you’re running out of gas it’s not often that you’re going to recover. I knew it was going to happen. Nevertheless, it was disappointing."

While Teunissen saw some dangerous representatives and jumped on board, Van Aert didn’t feel it was up to him to mark this move.

"I had tried a few times and this move featured several favourites and outsiders so it was good to have him there," he said. "The situation with Mike in the front group was ideal because I was able to profit from that in the chase group. That wasn’t the reason for us to race in the chase group: having two riders up front is even better.

"You can’t predict how a finale would be ridden. It was Mike’s first race of the season, just like for me. He gave it a try but sadly enough it just didn’t work out for him. In hindsight, it’s always easy to make different decisions. CCC probably didn’t expect Trentin to be dropped either. Next time, it’ll work out just fine for us."

Teunissen was asked about the team leadership and whether it should be a shared or singular.

"There’s no team leader," Teunissen said. "This time I joined the move and that put Wout in a comfortable position. If the other teams don’t let the gap grow up to two minutes then Wout might have bridged up. We have to be honest during the race and keep ourselves in the race.

"The way Wout is racing, he’ll be the man to watch during the upcoming weeks. We will not dominate the races but we’ll certainly play our role. We want to show ourselves, but obviously not by being dropped during crucial sections."

It was the first race of the season for both Van Aert and Teunissen, as they both came off an altitude training camp on Teide in Tenerife. Both riders won a stage in the Tour de France last year, with Teunissen also wearing the maillot jaune for two days. Van Aert then had a horrible crash in the Tour de France time trial. He was forced to swap holidays and a full cyclo-cross season for a recovery program.

He did manage to race the 2020 Dübendorf cyclo-cross World Championships in Switzerland last month, finishing fourth at long distance from his longtime rival Mathieu van der Poel. He seems well ahead of schedule and will surely be a top favourite in the following Spring classics.

"I learned that I’m quite good. Despite the preparation in Tenerife the climbs were going quite well too. There are only positive things to take along with me," Van Aert said.

On Saturday, Van Aert accelerated several times and clearly put other riders in the hurt box. He stepped into the spotlight for the first time in the race while keeping the pace high on the cobbles of the Paddestraat with Heinrich Haussler while the rest of a select lead group opted to take a break.

"Just before that, the selection was made and then they just gave that bonus away on the Paddestraat. I didn’t want that but I didn’t get enough support," Van Aert said.

Later, when the breakaway move with Teunissen was up the road, Van Aert was spotted in a move with Sep Vanmarcke (EF Education First) at the Molenberg climb and a last time with Tiesj Benoot (Sunweb) on the Berendries.

"Sep had the best intentions but we weren’t going anywhere with just the two of us. The gap was too big. It was more or less the same with Tiesj, but he didn’t ride flat out because he had Kragh Andersen up front. That was a somewhat weird tactic because it would only be a bonus for them if we would join the leaders," Van Aert said.

Nevertheless, Van Aert didn’t have many regrets, as this race was originally not on his race program. The uncertainty about his scheduled Italian races led him to race the Omloop.

His goal is to be at his best during the so-called ‘holy week’, the week with the Ronde van Vlaanderen and Paris-Roubaix.

"Who knows," Van Aert laughed when asked how good he would be come early April.

"It’s hard to predict. It’s always the goal to improve even more but the theory still has to be proven to be correct. It’s good to start well. It’s a boost to the confidence."

Teunissen confirmed as much: "Hopefully we can all work on the final details and improve our form. Then it’s looking good for the upcoming races. If I’ll be able to move along on the crucial sections then things will look different."