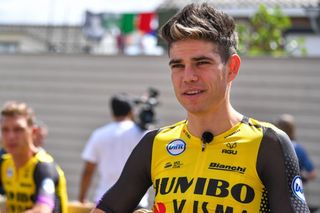 Wout van Aert has said that he is considering legal action against Tour de France organiser ASO following the crash that forced him to abandon this year’s race. The Belgian sustained a deep gash to his right buttock after clipping a barrier in the final kilometre of the stage 13 time trial in Pau and twice underwent surgery to repair the capsule and muscle of his upper thigh and hip.

The crash brought a premature end to Van Aert’s debut Tour and his road season, and has severely delayed the start of his cyclo-cross campaign. It still unclear when he will be able to return to competitive action.

Speaking at a press conference in Gooik on Sunday, the Jumbo-Visma rider said that he had not ruled out seeking damages from ASO. Het Nieuwsblad reports that Van Aert and Jumbo-Visma have sent a letter on the incident to ASO, though the issue of financial compensation has not yet been formally raised.

"My management and team are currently looking at this," Van Aert said, according to Het Nieuwsblad. “It is clear that the severity of the injury was the result of the way in which the barrier was placed there.”

Two weeks ago, Van Aert rode a bike for the first time since the crash when he took in a 7.5km spin on an e-bike near his home in Herentals. That act marked the symbolic beginning of the next phase of his lengthy rehabilitation.

“I’m going in the right direction,” Van Aert said, according to the Belga news agency. “As you can see, I can walk quite well. Compared to a few weeks ago, the improvement is remarkable. I feel more like a sportsperson now that I can go to the physio and do some muscle strengthening exercises. I’m already swimming and I’ve ridden for an hour on the home trainer. It’s very positive."

Before his crash, Van Aert had planned to end his road season in early in order to shift his focus to cyclo-cross for the winter. The three-time world champion acknowledged on Sunday, however, that it is not yet clear whether he will be able to return to action during this winter’s cyclo-cross campaign.

“I hope so. It’s my objective, at least,” Van Aert said. “But is it realistic? I’m going to do everything I can to get back to cyclo-cross. I’ll continue my rehabilitation. The question is knowing when I will be in form and can regain my best level.”