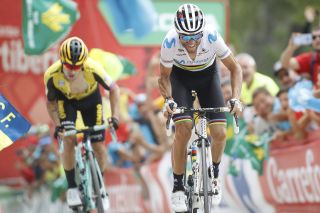 Quintana insists that Valverde is Movistar’s Vuelta a Espana leader

For the umpteenth time in his career, Alejandro Valverde (Movistar) has proved that age is no obstacle for him when it comes to winning as the 39-year-old reigning World Champion captured the 12th Vuelta a España stage victory of his career on Friday.

Nor was it any ordinary stage – rather Valverde out-powered three of the top favourites for overall victory in one of the steepest summit finishes of this year's Vuelta a España no the Alto Mas de La Costa, pushing Primož Roglič (Jumbo-Visma) into second place and even distancing race leader Miguel Ángel López (Astana Pro Team) and teammate Nairo Quintana (Movistar) by six seconds.

In the process, Valverde claimed Movistar's second stage of the 2019 Vuelta, has moved up into third overall and – for now at least – has to be considered a serious favourite for overall victory in Madrid.

The win is the 128th of Valverde's career and his fifth in 2019, as well as being his 12th success at the Vuelta a España.

Now just 16 seconds off the overall lead, Valverde played down his options of winning the Vuelta for a second time in ten years, asking reporters rhetorically, "How is it possible I can win it, if I'm nearly 40? I'm surprising myself."

"I have to be realistic, there's a long way to go, and Roglič is sure to gain time on us in the time trial."

Valverde denied that he had had a problem midway on the final climb at one point when Quintana attacked, saying instead, "I was just going up at my own pace.  Did you see Nairo? He was brilliant, spectacular, really aggressive, going for it with dos cojones there."

In a possible sign that Movistar's leadership issues could finally be settled, Valverde personally congratulated Quintana after the finish, telling him "Eres Grande!" – You did great! – and he insisted that both riders have a GC card to play.

Valverde explained that the team's strategy had been for Quintana to try to drop the rest of the field, whilst he waited behind for the finish, in case the Colombian had not gone clear, to then try and take the stage win. Which he duly did.

Quintana's repeated accelerations on the Alto Mas de la Costa enabled the quartet of favourites – López, Roglič, Quintana and Valverde – to distance the rest of his rivals. The race looks increasingly as if it will be disputed between these four, all of whom are still within 30 seconds of each other, with Rafał Majka (Bora-Hansgrohe) nearly two minutes further back.

Just as he had been after stage 6, Valverde was adamant that he and Quintana were singing from the same sheet in the battle to win the Vuelta this year.

"We didn't have to shut anybody up, we're fine with what we're doing, "Valverde concluded, "There haven't been and there won't be any problems between us."