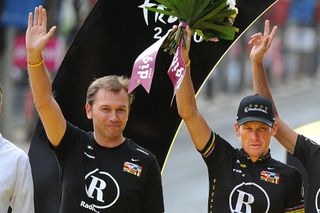 Although Lance Armstrong has long-since settled the federal fraud case against him last year, the US government is still waiting for former manager Johan Bruyneel to pay up the $1.2 million judgment against him.

Bruyneel on doping: It didn't start with us and it didn't end with us

US government chases Bruyneel for payment after Lance Armstrong settlement

Bruyneel was named in the Federal False Claims Act case filed by lawyers for former pro Floyd Landis, who argued that the doping activities of the team owners amounted to fraud against the US Postal Service, an independent federal agency, which supported the team with more than $30 million during its sponsorship.

Armstrong settled the case in April 2018 for $5 million, $1.65 million of which went to Landis, who used the funds to support the Floyd's Pro Cycling Continental squad. Landis is due 10 per cent of the $1.2 million if it is ever paid by Bruyneel.

According to USA Today Sports, the US Justice Department hired Spanish counsel to serve documents to Bruyneel at his home in Madrid, Spain, but when Bruyneel answered the door he refused to accept the documents.

The government has offered Bruyneel one more chance to contest the decision, with a federal judge granting him a 60-day stay on the judgment.

"The United States wishes to grant Bruyneel a final opportunity to appear in the proceedings and, if appropriate, to seek relief from the Default Judgment against him or otherwise respond to the Motion for Default Judgment," the Justice Department said, according to USA Today.

Bruyneel and Armstrong were among those banned for life by the US Anti-Doping Agency in the 2012 Reasoned Decision based on the testimony of numerous witnesses who attested to organised doping within the team during Armstrong's Tour de France run from 1999 to 2005.

The Court of Arbitration for Sport upheld the ban in October, 2018, with Bruyneel responding with an open letter in which he stated: "I want to stress that I acknowledge and fully accept that a lot of mistakes have been made in the past. There are a lot of things I wish I could have done differently, and there are certain actions I now deeply regret. The period I lived through, both as a cyclist and as a team director, was very different than it is today.

"Without going into details in this letter, I would simply like to observe that we were all children of our era, facing the pitfalls and temptations that were part of the culture at the time. We didn't always make the best choices."