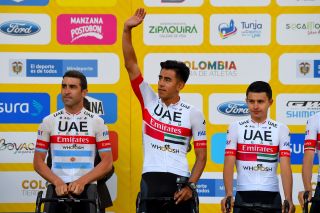 UAE Team Emirates has come out the strongest in the first six weeks of the 2020 season, taking home 10 victories on three continents with four different riders and look on course to climb up the UCI team rankings this season.

Last season UAE Team Emirates finished the year fourth behind Deceuninck-Quickstep, Bora-Hansgrohe and Jumbo-Visma in the UCI World Team Rankings, but were sixth in the victory count, with Astana and Mitchelton-Scott taking the top step more often.

So far this year Deceuninck-Quickstep, last year's dominant team, was next best with seven wins just ahead of EF Pro Cycling with six.

UAE Team Emirates' success included three stages at the Vuelta a San Juan by sprinter Fernando Gaviria and three by Sebastian Molano at Tour Colombia 2.1. The team's sprint lead-out in both cases enlivened by new recruit Max Richeze from Deceuninck-Quickstep. Both riders outstripped Deceuninck's designated sprinter Alvaro Hodeg, who landed five of the team's podium placings but hasn't found the speed yet to take a win.

Over in Europe, Tadej Pogacar was impeccable at the Volta a la Comunitat Valenciana, winning two stages and the overall, while Rui Costa claimed a stage win in the Saudi Tour.

In the WorldTour races, Lotto Soudal have had the highest hit rate, taking three wins - two by Caleb Ewan and one by Matt Holmes at the Tour Down Under. Deceuninck-Quickstep  took out two wins - the Cadel Evans Great Ocean Road Race with Dries Devenyns and a stage in the Tour Down Under by Sam Bennett. Trek-Segafredo also won two WorldTour races - Richie Porte's stage and overall win at the TDU.

The biggest turnaround has come from NTT Pro Cycling who, as Dimension Data had the misfortune of being the lowest ranked surviving WorldTour squad, just ahead of Katusha-Alpecin who folded into the Israel Start-Up Nation organisation in 2020.

NTT has scored one WorldTour win already this season - Giacomo Nizzolo's stage in TDU - and three others, with Ben O'Connor taking a stage in Etoile de Besseges and Max Walscheid two stages in Tour de Langkawi, with seven podium placings to boot.

The addition of Walscheid and new management in Bjarne Riis seems to have paid off so far.

Trek-Segafredo also have four wins to date with Matteo Moschetti's two victories in the Challenge Mallorca, as do Team Sunweb - all in the Jayco Herald Sun Tour - and Arkea-Samsic thanks to Nacer Bouhanni's three wins and Nairo Quintana's overall victory in Tour de la Provence.

Of the WorldTour teams, only the CCC Team have gone without a win so far, taking seven podium placings. Last year's second-lowest WorldTeam in the rankings, CCC may have fallen shy of the top podium step so far this year, but have taken home seven podium spots.

Groupama-FDJ were the least represented on the podiums of the WorldTour teams, taking only one each podium placing and are nearly last of the WorldTeams in the UCI rankings with only Jumbo-Visma - also off to a slow start - the only top division team behind them.

Cofidis, the newest WorldTour team, has similarly struggled, taking a win in the Tropicale Amissa Bongo with Elia Viviani's brother Attilio, but the European champion's crash in Tour Down Under hampered his chances.

The UCI teams rankings tell a different story, with the classification favouring depth over podiums and WorldTour points over smaller races.

The UCI resets its teams classification at the start of the season, then takes the points of the best 10 riders on each team to form the ranking.

Mitchelton-Scott lead the teams classification by 110 points over Team Ineos, with UAE Team Emirates in third, closely followed by Trek-Segafredo.

The UCI teams classification will be critical for teams wishing to continue in the sport's top tier. The UCI will use the three-year team rankings to determine which squads will remain in the WorldTour when it is limited to 18 teams in 2022.