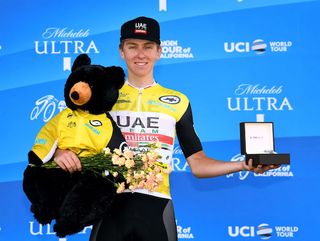 Aside from Egan Bernal’s Tour de France win, the standout GC performance from a young rider in 2019 came from Tadej Pogacar, who at the tender age of 20 finished third in the Vuelta a Espana and picked up three stage wins.

The young Slovenian was consistently strong throughout his debut WorldTour campaign with wins in the Tour of California and the Volta ao Algarve, but despite proving to be one of the revelations of the season the management at UAE Team Emirates are reluctant to heap too much pressure on the rider’s shoulders.

The squad will focus their GC ambitions around Pogacar and Italian rider Fabio Aru, who must deliver a result after two years of injuries and health issues.

When asked if Pogacar was now the go-to rider for the team in three-week races, team director Allan Peiper expressed a degree of caution, although he also hinted that the Slovenian rider would have ample opportunities to build on his success in 2020.

“You might say that based off his results this year in some of the races he did, like the Vuelta, California, and Algarve but at the same time he’s still very young and so to put the pressure of leading the entire team on his shoulders is something we need to think about,” Peiper told Cyclingnews.

“For us, Fabio Aru needs to take responsibility because that’s what he’s paid for. He’s had a couple of unfortunate seasons, especially this one, but I’d say that he and Pogacar are the front runners when it comes to GC. Aru because of his history and Pogacar because he’s already getting runs on the board.”

One scenario could involve Aru targeting the Giro d’Italia, while Pogacar concentrates on a possible Tour de France debut. That in itself would represent a huge step for Pogacar, who until the start of this 2019 -and despite a Tour de l’Avenir win in 2018 - was on the books of a Continental team last year.

“It could be, with Pogacar at the Tour and Aru at the Giro, but at the moment it’s still up in the air in terms of what Pogacar will be doing. He’s still young, and while he won three stages and finished third at the Vuelta, maybe throwing him in at the deep end might be a tad early. He might need a bit of a slower run in but that’s all going to be finalized in the next couple of weeks.”

In a more general sense, UAE Team Emirates has strengthened in virtually every department. They have signed David de la Cruz and Davide Formolo in order to bolster their stage-racing core, while Mikkel Bjerg and Brandon McNulty were two of the hottest properties on the U23 market this season. The team has also brought on board the highly-rated Alessandro Covi and Andres Camilo Ardila. In addition, sprinter Fernando Gaviria sees his leadout train bolstered by the recruitment of Max Richeze, who helped the Colombian during his QuickStep days.

“The roster has taken a step forward, especially when it comes to the support for Pogacar and Aru. We’ve given ourselves some real depth when it comes to stage racing but at the same time we’ve gone out there and picked up some fantastic young talent,” Peiper said.

“We’ve strengthened around the climbers but also with our time trialing unit with young Berg and McNulty coming on board."

Gaviria and Alexander Kristoff will lead the line in the Spring Classics, and while the team enjoyed their best season to date in 2019, with 29 wins, Peiper is determined to see the team improve next season. The minimum, he says, will be to match this year’s win tally.

“For me, and with the roster that we have 30 wins should be minimum. Someone like Gaviria has got close to 20 on his own in the past. So if things line up… Jasper Philipsen had 33 top-ten placings from 65 races. He had one win but if you translate that to his second season he might have between five to ten wins. Without getting ahead of ourselves. Thirty wins should be the minimum next year and we can go for 40.”