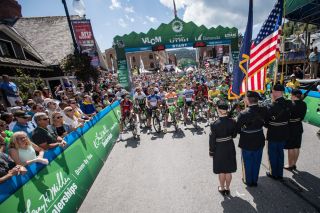 The organisers of the Larry H. Miller Tour of Utah named two new host cities for the 2020 edition, the race's 16th year, and a tight-packed seven-stage parcours which will take place between August 3rd and 9th.

The racing will begin just outside Salt Lake City and, with seven stages all held within a 100km radius, the course harkens back to the race's traditional format with the state capital as the centre.

The former 2.HC-ranked race is now part of the UCI's new Pro Series, but the organisers intend to keep the focus on highlighting the features of their punishing but beautiful North American landscape.

"Our designation as a UCI ProSeries race by the international cycling federation is new, but the Larry H. Miller Tour of Utah remains a crowd favourite and one of the most successful races in North America," said John Kimball, managing director of the Tour of Utah.

Tour of Utah shakes things up for 2019

Tour of Utah: Everything to play for on Powder Mountain

"We are fortunate to have welcoming host venues that roll out the red carpet, picturesque courses that show beauty and brawn, and a very supportive cycling community that enjoys watching great athletes. We look forward to bringing the Tour of Utah to the state and the world in August."

The pre-race presentation and the first stage of the race's sweet 16 will start and finish in Herriman City, the first new host city. The stage will start at the Zions Bank Real Academy, the training ground for Utah's Major League Soccer team Real Salt Lake, as well as the USL soccer team Real Monarchs.

The race then moves just down the road to Pleasant Grove where the second stage will start at the headquarters of essential oil makers doTerra and finish in Provo, which last hosted Tour of Utah in 2011. The stage could head east into the mountains or take in a wind-swept loop around Utah Lake for a sprinter-friendly day.

The third stage will start and finish in Payson which hosted a key stage in the 2018 edition where Sepp Kuss got away to win solo over Mt. Nebo. The peloton then moves 100km north to Woodward Park City, another new host town, for the high altitude finish at Snowbird Resort.

Ogden holds the fifth stage and while the previous stages from Ogden have headed over the North Ogden Divide or ended on Powder Mountain, this year's stage will be a circuit race in downtown Ogden.

The last two stages take place in Park City. Stage 6 will begin at Canyons Village at Park City Mountain, a four-season resort, and the race concludes with the free-for-all, flat-out circuit around Park City that finishes on the town's historic Main Street.

Race organisers will invite 16 teams to the race in 2020 and announce the final selections in the spring.