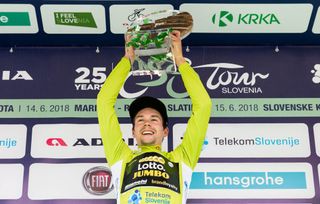 The spate of race cancellations and postponements due to the coronavirus pandemic has stretched into June after the Tour of Slovenia organisation announced that the event will not take place in 2020.

The UCI ProSeries race was due to take place from June 10-16 but has been cancelled with an advance notice of almost three months due to the extensive nature of the containment measures being taken in Slovenia, which borders Italy, the country worst-affected by the Covid-19 pandemic.

The Tour of Slovenia has in recent years established itself as an alternative to the Tour de Suisse and Critérium du Dauphiné as preparation for the Tour de France. Diego Ulissi won the race in 2019, while Primoz Roglic beat Rigoberto Uran to the overall in 2018.

“The fact is that all groundwork had to be cancelled for an unforeseen length of time and we had to question the new financial reality. Considering this, we had to accept the responsible decision and cancel the Tour of Slovenia for this season.”

Many race organisers have announced the postponement rather than the cancellation of their events due to the coronavirus pandemic, but the Tour of Slovenia follows races including the Tour de Romandie and Tour de Bretagne in confirming that its next edition will not be held until 2021.

“The decision to cancel the race was done after careful and meticulous consideration, taking account of the wider context of the race organization,” said organising committee president Mojca Novak. “The Slovenian government passed measures that don’t allow further execution of the organizational and promotional activities. At the same time, we have to consider the health of everyone involved in the project.”

The UCI has confirmed that all racing has been suspended until the end of April, while the Giro d’Italia, scheduled for May 9-27, has been postponed. Races taking place in June, including the Critérium du Dauphiné and Tour de Suisse, remain on the calendar, but the cancellation of the Tour of Slovenia will raise further questions about their viability, as well as that of the 2020 Tour de France, which is due to get underway in Nice on June 27.

Five-time winner Bernard Hinault told Le Parisien this week that the Tour organisation “should not hesitate” to cancel the race if the coronavirus pandemic does not alleviate rapidly.

Following a teleconference with key race organisers on Tuesday, the UCI agreed in principle to extend the cycling season to November 1 in an endeavour to possibly hold the postponed Giro and Monuments in the Autumn, but those plans would have to be revisited if the coronavirus pandemic leads to the cancellation of races throughout the summer.