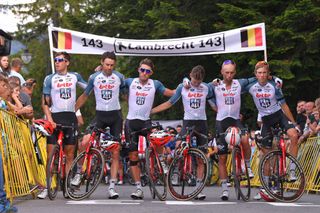 The number 143 will never be worn again in the Tour de Pologne, in memory of Bjorg Lambrecht, who died during this year's race.

Lambrecht was wearing the 143 dossard when he crashed on stage 3 of this year's race, sustaining injuries that caused his death in hospital soon after.

In a statement on Friday to honour Lambrecht's memory, the Tour de Pologne organisers announced that the number 143 will be retired from 2020.

"We carry the memory of Bjorg Lambrecht everyday, but since it’s All Saints’ Day, please light a candle for him, wherever you go today. We will," read the message.

"And we officially confirm that number #143 will never be worn again in Tour de Pologne. It’s #ForBjorg. We’ll remember you always."

Lambrecht's crash was caused by reflectors built into the side of the road, according to an investigation by the Public Prosecutor in Poland.

"As a result, he lost control of his bike, suddenly turning to the right and then to the left," said prosecutor Malwina Pawela-Szendzielorz, according to Polish media reports.

Lambrecht, who was 22 and riding his second season as a professional with Lotto Soudal, ultimately crashed into a concrete pipe, suffering a severe injury to his liver. He was resuscitated and taken to a hospital in critical condition but did not survive surgery.

The Tour de Pologne continued the next day with a neutralised stage in which all teams spent a number of kilometres riding ahead of the peloton, before the remaining Lotto Soudal riders led them over the finish line after a minute's silence.