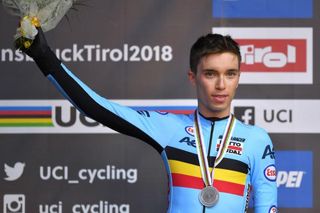 Lotto Soudal: Lambrecht 'is still with us'

Reflectors built into the side of the road were responsible for Bjorg Lambrecht's fatal crash at the Tour de Pologne, according to an investigation by the Public Prosecutor in Poland. The 22-year-old Lotto Soudal rider died from his injuries after the crash on stage 3 of the race earlier this month.

"Two UAE Team Emirates riders close behind him saw him riding over a reflector that had been incorporated into the road surface," said prosecutor Malwina Szendzielorz-Pawela, according to Polish media reports.

"As a result, he lost control of his bike, suddenly turning to the right and then to the left."

Lambrecht ultimately crashed into a concrete pipe, suffering a severe injury to his liver.

According to Belgian newspaper Het Laatste Nieuws, the reflectors are 10x10 centimeters, rising 1.8cm above the asphalt, and are intended to show the edge of an unlit road, serving to indicate the way in the dark.

"It is sad that resources that are thought to improve road safety are the cause of such a tragedy," Szendzielorz-Pawela said.