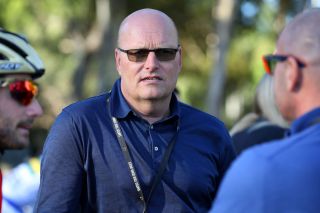 Bjarne Riis has emailed an apology to Tour de France director Christian Prudhomme on the eve of the presentation of the event’s 2021 Grand Départ that is confirmed to take place in Denmark next July.

Prudhomme revealed the route details of the opening three stage of the 2021 Tour de France at an official presentation in Vejle on Tuesday. While on stage, he was asked about Riis and his new position as manager of the WorldTour team NTT Pro Cycling and future participation at the Tour de France.

Prudhomme confirmed that he received an apology in an email from the Riis Monday, the day before the presentation.

"I heard a few weeks ago that Bjarne Riis had again joined a cycling team. The ASO has not been involved in that decision," said Prudhomme, according to a translator at the presentation.

"But yesterday [Monday - ed.] I received an email from Bjarne Riis, regretting what has happened, what he has said and how he has treated the yellow jersey."

Riis is a controversial figure in professional cycling. He was once hailed as Denmark's highest-profile sports figure before he later admitted to using performance-enhancing drugs like EPO, growth hormone and cortisone during is career, and particularly when he won the 1996 Tour de France.

After his admission to doping in 2007, he offered to give back the yellow jersey that he won during that edition of the Tour de France.

After retiring as a professional cyclist, Riis went on to manage versions of the WorldTour teams CSC, Saxo Bank and then Tinkoff-Saxo from 1999 through 2015.

Riis was then implicated in a detailed investigation by Anti-Doping Denmark in 2015, that pointed to him being complicit in a widespread doping operation by introducing riders to Dr Eufamiano Fuentes, the Spanish doctor at the centre of the Operacion Puerto doping investigation.

Direct allegations were also levelled against Riis by former riders Tyler Hamilton, Jörge Jaksche and Michael Rasmussen. However, the accusations fell outside of the 10-year statute of limitations.

In 2016, Riis took over the Danish Continental men's outfit TreFor and renamed it Team Virtu Pro–Véloconcept intended to be a feeder team to an eventual WorldTour outfit. He also created a women's programme, Virtu Cycling, from the former BMS Birn team. That team folded at the end of 2019 due to a lack of sponsorship. The men's program is currently operating as Team Waoo at the Continental level.

The NTT Pro Cycling team confirmed in January that they had partnered with Riis’ Virtu Cycling Group, that includes partners Lars Seier Christensen and Jan Bech Andersen, with Riis becoming the manager of the UCI WorldTeam.

Virtu Cycling Group have had a stated goal of bringing a WorldTeam to Denmark. Although NTT Pro Cycling is currently registered in South Africa, in a post on social media this month, Riis’ partner Seier wrote that while it has taken longer than expected, it remains a priority to have a team competing at the Tour de France in 2021.

In a January interview with Cyclingnews, Riis said that he deserves another chance in professional cycling. He promised that he would never be involved in another doping scandal and went as far as to say "If I fail again, put me in jail."

At the 2021 Tour de France Grand Départ in Vejle, Prudhomme said that Riis' mistakes cannot be undone, but that he accepted the Dane's apology as a move in the right direction.

"Although it does not mean that you can strike a line over the past, I welcome it and it is a step forward," Prudhomme said.