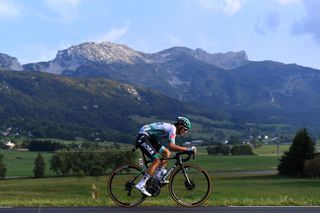 "I feel great. It was an absolutely awesome day for me. It was a fight from the beginning on and I knew I had to make it to the finish alone.

"When I saw that Carapaz was dropping the speed, I thought now it's the time to go and went all-in to the end. It's a big relief also for the team and for me. I can almost not imagine it. The step I made this year is huge and I'm so blessed to win today."(Bora-Hansgrohe)

"It all went wrong at the hardest moment. I managed to go with the attacks twice and I’d hoped to cross the summit together, I didn’t think there would be attacks so early. I managed to get back on with 200 to 300 metres from the summit, but they went again.

"I’ve no regrets. They were stronger than me." (Groupama-FDJ)

"It was a really hard start, really hectic. There was a climb almost straight away. We all knew it was a day for a breakaway, and we managed to get three guys in there.

"Obviously it’s a bit disappointing to finish second. I don’t know if we could have managed it differently, but at least we tried. We showed that we don’t give up. We lost the GC [with Egan Bernal] but we’re still there to win stages, and already from today we showed it. We will keep doing that in this last week.

"Today was a pretty good day for me. Obviously I’m not at 100 per cent, but Richard [Carapaz] was going really well. At first I thought he’d won, actually, when I crossed the line but then I realised he was second and of course that’s a bit disappointing, but that’s how it is. We’ll keep fighting and for now the most important thing is the spirit. (ITV)

"It was a good day again for us, again in yellow but the start was quite fast, for sure in the first hour and again in the end it was going a bit faster. We needed to keep the focus up.

"Some big days to come but the team was again doing a really great job, all the guys. We're ready and looking forward to [the coming stages]. [Tomorrow] is a 'Queen Stage' of this year, definitely, the highest point - super hard at the end with a bike path going in the last 3-4k - going quite close to the ski jump in Courchevel. The thing is, when you have the legs you can go on the flat, uphill, not so steep and more steep. Hopefully I will have the legs and we will do our best." (ASO)

"Today was a good day – a nice warm-up for tomorroe which will probably be the queen stage. Tomorrow there will be splits, I think.

"I feel good physically. It's the third week, so everyone is exhausted. Day by day, the legs are getting more and more tired, but I hope I have something left.

"Tomorrow we have the Col de la Loze which will be selective for sure." (UAE Team Emirates)

"You start every stage with the dream of winning at the Tour de France, but you also can't be too greedy because you’re competing against some of the best riders on the planet. Sometimes it works and sometimes not. Lenny [Kämna] showed today that he was the strongest on the climb. We’ve [known] since the beginning of the Tour that he’s extremely strong and so he’s a deserved winner.

"When Lenny attacked in the final, it was perfect timing. You could see he was strong. He was on [Richard] Carapaz’s wheel every time he went and then eventually made his own move. He rode perfectly, chapeau to him.

"When we were in the first group of 25 riders, I thought it was the good move, though the presence of Guillaume Martin made it tight because he was only six or seven minutes down on GC. I went off with Carapaz hoping a bigger group would come from behind, which it did. Then I was told I had Tiesj [Benoot] and Casper [Pedersen] coming across, so I waited for them. We had a good bunch of riders and everyone committed to going until the last climb. Then it was just a matter of having the best legs on the climb. (Eurosport)

"It was hard in the final, there wasn’t much I could do. I gave it everything. It’s a pity how it worked out, but the race exploded early and went away from me. I was beaten by better riders today.

"It’s going to be hard to win a stage but there’s still some that suit me, but now I’m thinking of recovering from today first. I know the Col de la Loze and it’s very hard. It’s the first time we finish up there, so it’ll be special." (Deceuninck-QuickStep)

"Today I was suffering all day, with back pain and it was increasing. On the last climb, it was also in my knee. I am fucked up on all sides. If I continue like this, it will be difficult to fight for the stage in the Col de la Loze, which is a very hard climb, with a big incline." (AS.com)

"I expected a tough start but in the end it was fine. I think I was just having a good day, and it was nice day to have a good day. I just hope I didn’t over-use the legs for the next days.

"Once the intermediate sprint is done, then it’s all about preparing for the next day, just preserving your legs. If you go over your limit one day, you’re gone the day after, especially in this Tour de France, it’s so hard. For now there’s controlled calm but there’s still a lot of work to do.

"Friday’s stage [flat course to Champagnole] will be a battle. It’ll be a hard day. It’ll be aggressive all the way to Sunday. It’d be nice to have it [green jersey] in the bag and be able to enjoy the final stage, but I don’t think it’ll be that way. I’m getting more optimistic but that’s just because I felt good on the bike today. But it’s just one day and I can’t get ahead of myself because I know things can change." (ASO)