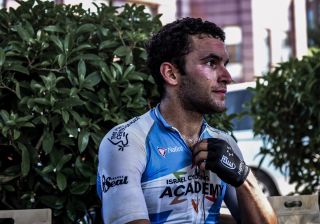 Itamar Einhorn (Israel Start-Up Nation) nearly claimed the first-ever win for an Israeli rider in a men's pro race Wednesday at the Tour Colombia 2.1, but the 22-year-old almost met with disaster on his way to his third-place finish when he made contact with Colombian teammate Edwin Avila in the final 50 metres.

Both riders had been given the green light to sprint for themselves, but when Einhorn tried to come around Alvaro Hodeg (Deceuninck-QuickStep) and eventual winner Juan Sebastián Molano (UAE Team Emirates), he moved directly into the path of Avila, causing both riders to hesitate and adjust their position. Nevertheless, Einhorn held his ground and earned his trip to the stage 2 podium.

"Everyone looked at the video and said I did something against him, but the plan with the team was that I would sprint for myself and he would sprint for himself," Einhorn told Cyclingnews Thursday before the start of stage 3 in Paipa.

Esteban Chaves: The Giro d'Italia is a race in my heart

"So it was part of the plan, and we did meet together, but if you look carefully at the video, you can see it's not something that I did on purpose, it's just that I had no other place to go at that moment. He was a little bit behind and I didn't really see. I didn't know it was him until I saw the video," he said.

Einhorn was launching his sprint into the wind, but it was likely a little too late, even if he hadn't had the bump with his teammate.

"Maybe if I had gone earlier I could have sprinted for second place, but I don't know," he said. "I had a good sprint, but I didn't have really good power, so maybe third place I am happy with. So I'm happy with what I did, and I learned a lot from it."

In their first year on the WorldTour, the Israel-based team have already claimed a win, with Frenchman Rudy Barbier sprinting to a stage victory last month at the Vuelta a San Juan in Argentina. But the team has been clear since their inception in 2015 as a Continental team that exists as a pathway for Israeli cyclists to the top end of the sport. Einhorn's podium result is another step in that direction. It's also another step in Einhorn's development.

"It means a lot to me because I have been many times fourth, with the devo team and with the French team I rode for, and now with a pro team to get on the podium is very special," he said. "But it is only third, and it's far from what I want. But I think with a bit of luck and a bit of experience I can do it.

"I received many messages from Israel, and I can finally show that all the hard work over the past few years has paid off. One of the team goals last year was an Israeli podium, and now it has finally happened, so from now on I will focus on the win. I have achieved the first goal, and now I will go for the second."

But he said that his win likely won't come this week in Colombia.

"The stages will become harder, and it will be a little bit harder for me and the oxygen is very thin. I also have to return some favours to the other sprinters like Avila."