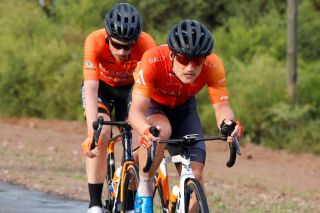 By now the image of American Robin Carpenter and his orange Rally Cycling jersey pushing along at the front of a race is a common sight, with the 27-year-old and his fellow escapees attempting to achieve the relatively rare feat of making a breakaway stick all the way to the finish.

Since joining the team in 2018 from Holowesko-Citadel, Carpenter has been Rally’s go-to rider for making the long play in stages and one-day races, including making the break at Fleche Wallonne last year and riding it close to the finish before Deceuninck-QuickStep and Julian Alaphilippe claimed another win.

For Carpenter, being out front is just a natural instinct.

“I’m sort of just continuing what I’ve always been doing, but it’s nice to keep having those opportunities and not get boxed into anything else,” Carpenter said of the free rein he’s been given at Rally. “It’s nice to still get your chances to go and be selfish out front.”

Last month at the Vuelta a San Juan, Carpenter made the breakaway on two stages, joining his Latin American cohorts and WorldTour riders off the front in the 2.1 race that featured a host of big names like Alaphilippe, Peter Sagan (Bora-Hansgrohe) and Fernando Gaviria (UAE Team Emirates).

He hopes to continue his adventures this week at Tour Colombia 2.1, where he’ll fly the colours of Rally’s new co-sponsor for the race, Colmédica, a UnitedHealth Group company, in a move that allows the team to highlight specific companies in markets across the world. In Carpenter they’ve found a good billboard for the TV time a breakaway earns.

How Carpenter finds success in making the moves boils down to one word, according to the Philadelphia native who grew up near the Manayunk Wall.

“It’s always patience,” he said. “You have to be really patient and not get over excited. Although sometimes it really depends on the race, like at some of those French point-ones that we’ve been doing, you just know it’s going to be pretty aggressive for a while until people wear themselves out. So you just have to stay toward the front and stay ahead of the splits, but you know it’s going to take awhile.”

Carpenter added, however, that Fleche Wallonne attack was one of the exceptions.

“It’s one of the bigger semi-Classics, so people are more motivated to get in the break, and they are going to try really hard in the beginning,” he explained, revealing his breakaway skills.

“That was a case where you didn’t have to be too patient. You just had to go out there and ride extremely hard for half an hour."

“You can’t just float around and look at what’s around you. You have to be checking out what’s going on, looking for key riders or key teams and seeing what they’re up to. If you’re looking around and you see a whole bunch of big WorldTour teams also attacking, then you know it’s going to be a while, so you shouldn’t follow every five-man group that gets a 10-bike-length gap up the road. You have to pick and choose or else you’ll just blow yourself up.”

Carpenter has been racing since his teens, first moving to the Continental level in 2012 with Chipotle-First Solar, the development team run by Jonathan Vaughters’ Slipstream program. He moved to Hincapie Sportswear in 2013 and stayed with the team through 2017 as it morphed into Holowesko-Citadel, earning some big results, including an overall win at the Tour of Alberta in 2016 and stages at the USA Pro Challenge and Tour of Utah.

Despite the results, Carpenter hasn’t gotten a call up to the WorldTour, but he says he’s content where he is at.

“I wasn’t a junior phenom, so I didn’t have high expectations of being in the WorldTour automatically after being a U23,” he said.

“I didn’t race in Europe with the national team until my final year as an under 23. And so after that I was mostly happy just being a pro bike racer."

Making the jump to Rally two years ago has allowed Carpenter to race more in Europe as the US team moved to the ProTeam level and continues to bolster its European efforts.

“Being in Europe you really understand what the high level of the sport is all about, and you get to see where you stack up,” he said.

“I’ve always been fairly pragmatic about where I wanted to be or where I belong. Obviously, everybody wants to do the biggest races in the world, but I’m pretty satisfied with going to Europe all the time and doing some of the less well-known tours, they’re still super hard.”

Nevertheless, like any pro cyclist, Carpenter would still like to race at the sport’s highest level, but he knows that window of opportunity is closing with each year.

“I think I know what kind of rider I am and where I flourish,” he explained.

“I don’t have the super high power numbers to show off to a WorldTour team, which is what they’re looking for a lot these days. But I get by by being persistent and somewhat sneaky.

Carpenter has got his eye on spending more kilometres off the front in Colombia. Except for the final day and today’s team time trial, the 2020 Tour Colombia 2.1 route appears to be set up well for the sprinters, with the majority of climbing coming early in the day followed by long, mostly flat runs to the finish.

Carpenter is still looking to roll the dice on an escape or two.

"That would be the plan for sure. It looks like the start of those climbs is pretty easy; it’s not so bad. So it will be good to get away. But the profiles don’t look amazing for a breakaway this week just because there is so much flat at the end of the stages. But you never know, honestly.”