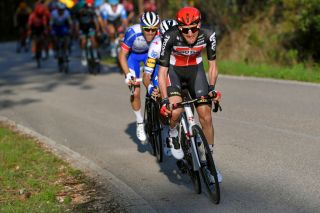 Tim Wellens (Lotto Soudal) has been ruled out of the Tour de France due to the injuries he sustained in a crash while training on Friday. Although the Belgian did not sustain any fractures, he suffered wounds to his shoulder, elbow and knee when he crashed hard while motor-pacing.

Wellens will be replaced in Lotto Soudal’s Tour line-up by Frederik Frison. The squad will be led by sprinter Caleb Ewan, Philippe Gilbert, Thomas De Gendt and John Degenkolb. The rescheduled Tour gets underway in Nice on Saturday.

“It is hard to describe how disappointed I am. This is one of the worst crashes I’ve ever experienced on the bike,” Wellens said on Monday.

CPA fires back at riders after criticism following Dauphine crash

“I was training behind the scooter when both motor bike and I were surprised by a bump on the road. The scooter managed to avoid the crash. I couldn’t. I was so surprised that I had no time to brake. The road rash is so deep because of our high speed. As I have injuries on big parts of my body, I have a higher body temperature and I cannot sleep well. This can never be healed in less than a week. Moreover, further recovery in the Tour de France is really impossible. In that race every stage is like a world championship.”

Wellens has raced the Tour on three previous occasions and he was an aggressive presence on last year’s race, winning the combativity award on two occasions and leading the mountain classification for two weeks before eventually losing the polka dot jersey to Romain Bardet in the Alps.

“This feels so bad. I was ready for the Tour. My goal was to win a stage. Especially the first stages suited me - tough stages in a region that I know so well,” Wellens said. "I did many times a recon of the stages to Nice, Sisteron and Orcières-Merlette.”

Lotto Soudal claimed four stage wins on last year's Tour, thanks to a sprint hat-trick from Ewan and a fine solo victory in Saint-Etienne from De Gendt.

That duo will lead the team's hunt for further stage success in 2020 alongside new arrivals Gilbert and Degenkolb. The line-up is completed by Steff Cras, Jasper De Buyst and Roger Kluge.