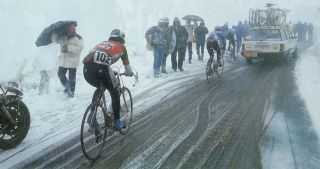 The Passo Gavia will always be remembered for Andy Hampsten's 1988 attack in the snowstorm that set up his victory in the Giro d'Italia but the climb has a much longer history, with today the 60th anniversary of when it was first climbed during the Giro d'Italia. It has become one of the iconic climbs of the Corsa Rosa and in cycling.

On June 8, 1960, the Giro d'Italia climbed the Passo Gavia during a 229km stage that also included the climbs of the Campo Carlo Magno and the Passo del Tonale, with Jacques Anquetil, Gastone Nencini and Charly Gaul fighting for overall victory.

The Passo Gavia became iconic and legendary in one day.

It offered the last chance to attack Anquetil and try to take the pink jersey and 23-year-old Italian Imerio Massignan was not afraid to try to topple the Frenchman.

Massignan was the first man to reach the Gavia summit, riding largely on rock-strewn, dirt roads, earning himself the nickname of the "Angel of the Gavia". However, he  punctured three times on the twisting descent, destiny taking away his moment of glory and chance of overall success.

2020 Giro d'Italia likely to start with time trial in Palermo

"It was a truly unforgettable day," Massignan recalled in a conversation with the Pontedilegno-Tonale Consortium that promotes the cycling and hiking routes on the area.

"At the time, few of us knew anything about the Gavia, and we didn't do any recon beforehand. Suddenly, I found myself in front of a mule track: there were gravel and stones on all sides, six-metre-high snow walls on one side and the cliff on the other.

"That day I was feeling like Fausto Coppi, who had died in the early days of 1960: he would have loved that brutal climb so much… I reached the pass with almost a two-minute advantage over Gaul. Behind me, other riders were pushed by the fans somehow trying to reach the summit. From that moment on, the name Massignan was indelibly linked to the Gavia, and I feel very proud of that."

Tragically for Massignan, his series of punctures on the descent to Bormio ended his dreams of winning the Giro d'Italia.

"I could have won the Giro, the gap with the rivals was enormous. I suffered three punctures on the gravel while the Legnano team car burnt out the clutch and there was no sign of any neutral motorbike assistance. I managed to fix the puncture on my own twice but then Gaul caught and passed me. I managed to catch him again because I wanted to win the stage but 300 metres from the finish in Bormio, I flatted for the third time. Gaul saw me and went for the win. After the finish line, I burst into tears, and I still have regrets about that day."

The Passo Gavia always has an impact on the fight for the maglia Rosa. At 2,621 metres high, it is the third highest climb ever covered during the Giro d'Italia, with only the 2,757 metres Passo dello Stelvio and the 2,748 metres Passo dell' Agnello even higher.

The Passo Gavia has been climbed 14 times in the history of the Giro d'Italia and it is the steep narrow roads at the summit and the often terrible weather that make for a great day of racing. Unfortunately, the risk of snow and avalanche lead to the cancellation of the climb during the 2019 Giro d'Italia and the Giro Rosa due to the risk of landslides and fresh snow even in July.

The introduction of the Extreme Weather Protocol and the better protection for the riders and the public means there are unlikely to be epic days like Massignan solo attack or the day in the snow in 1988 when Hampsten set-up his Giro d'Italia victory, Franco Chioccioli lost the pink jersey and a number of riders allegedly finished the stage in team car or frozen to the point of deliriousness.

Johan van der Velde was actually first to the summit of the Passo Gavia that day, attacking and fighting through the snowstorm. However, unlike Hampsten and others, he had little or no help from his team and froze on the treacherous descent, losing 46 minutes.

"Everyone knew it was going to be a hard climb, but no one – racers or directors – really knew how hard," Hampsten recalled to Procycling magazines a few years ago.

"Everyone was freaked out. I mean, I'd already been shivering uncontrollably on one of the earlier descents. There was no sunshine – it was nothing but rain and snow all day long. And yeah, some guys were saying, "Don't attack." The conditions were terrible. The riders really wanted to go slow and not race, but that wasn't happening.

"I could see that everyone else was terrified, so I just said to myself, "I'm going to do it. I'll save five per cent for the descent and go for it. I attacked right at the base because I could see that a lot of people were worried.

"7-Eleven were the only team that had adequate warm clothing. We had a guy waiting at the top with a musette bag full of warm clothes for every rider. The team had gone shopping at ski stores before the stage and got wool hats and Gore-Tex ski gloves or diving gloves. They bought every useful item you could think of.

"Prior to that day, cars didn't have rain bags – the bag of warm, wet weather gear for riders that sits in the team car in case of the unexpected. That was a 7-Eleven innovation. (Directeur sportif) Mike Neel also gave us a great pep talk. He sat us down and told us this was our day. He said that it was snowing up there, but that the race was still going to happen, that they were ploughing the snow off the road, so it was going to be OK.

"Psychologically, no one can explain how tough it was – 25km of descending in freezing snow and sleet. It was the hardest thing I've ever done. Everyone who crossed the finish line that day had to dig incredibly deep to get there. When I talk to the other riders today, it's never, "So and so did this," or, "Yeah, Breukink won." It's, "Wow, you were on the Gavia in '88."

Travel throughout Italy is now possible after the COVID-19 coronavirus pandemic, with travel in much of Europe expected after June 15.

The Stelvio National Park has scheduled the motor traffic restrictions on the big climbs of the area, including the Passo Gavia on July 26 and August 30. The Passo del Mortirolo will be car free on July 24, the climb to Laghi di Cancano on August 28, while the Passo will be reserved for cyclists and the 20th edition of Scalata Cima Coppi on August 29.