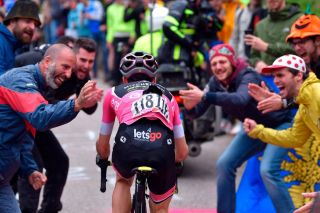 Mauro Vegni, the director of the Giro d'Italia, has said he is preparing for the safe organisation of the Corsa Rosa but made it clear he and his staff are not planning for a race behind closed doors, with no crowds.

Vegni indicated it will be up to local authorities and the UCI to decide any restrictions, rider protocols, and other rules that could be imposed to limit the risk of COVID-19 contagion.

As part of the rescheduled race calendar, the Giro d'Italia is due to be held between October 3-25, after the Tour de France (August 29-September 20) and at the same time as most of the Classics, with the Vuelta a España (October 20-November 8) overlapping with the final week of the Giro.

According to La Gazzetta dello Sport, Vegni and his senior RCS Sport staff will have an important conference call with the Italian Minister for Sport next week to discuss the Giro d'Italia.

Italy was the first European country to go into a strict lockdown in early March and has suffered over 33,000 official deaths due to COVID-19, a significant part of them in the Lombardy region. However, the government has now eased the lockdown restrictions and will soon decide if it is safe to hold large sporting events.

Serie A football will be held behind closed doors if given the green light but Vegni, like his Tour de France counterpart Christian Prudhomme, is working on what he calls on an 'open doors race' format, where crowds can perhaps watch the race from the roadside, while respecting social distancing.

"It will be up to other people to set any eventual indications and rules that we have to follow. Of course, after seeing the crowds that gathered in Milan for the fly-by of the Frecce Tricolori jets, we'll have to ask ourselves some questions."

The Giro d'Italia will not start in Hungary as planned, with the Grande Partenza and the opening stages to be held in the south of Italy, either in Sicily or Calabria, before following the original race route in Sicily and up the Adriatic coast, with key mountain stages to Madonna di Campiglio, over the Passo dello Stelvio and then to Sestriere before the time trial into Milan on October 25. Some of the stages may visit the areas worst hit by the COVID-19 pandemic as a sign of solidarity.

"We've got to finalise the opening three stages but there won't be any major changes to the rest of the route," Vegni said.

"We've reduced the options for the start down to Sicily and Calabria and we'll soon decide. We plan to present the new race route online at the end of June or early July."