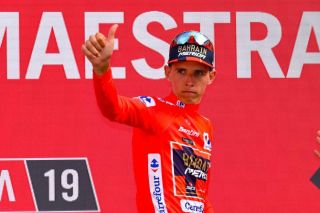 Teuns out of San Sebastian after freak gardening injury

The Vuelta a España’s lead changed hands for a third time in six days on Wednesday as Bahrain-Merida’s Dylan Teuns claimed his first-ever Grand Tour overall leader’s jersey at the end of a long breakaway.

Teuns was easily pipped to the line on stage 6 by Jesus Herrada (Cofidis) in a two-man duel at Ares de Maestrat’s grinding uphill finish.

But having left the only other GC dangerman, David de La Cruz (Team Ineos), behind with four kilometres to go, the 27-year-old Belgian was still able to wrest the lead from Astana’s Miguel Angel Lopez.

Second last year in the Vuelta’s Monte Oiz stage won by Michael Woods (EF Education First), this time round the Belgian’s second place on an uphill finish in the Spanish Grand Tour netted him a much bigger consolation prize.

It also reversed the result he achieved in the first week of the Tour de France in july, when Teuns won on the Planche des Belle Filles in another two-way battle against Trek-Segafredo’s Guilio Ciccone, but could not stop the Italian from taking the lead.

Teuns spell in la roja also shows he's firmly moved past his freak summer accident this summer, when he fell off his garden lawnmower following the Tour de France and needed 15 stitches in a head wound.

"As you saw today in the race, I’m doing fine," he told a Belgian reporter.

Previously, Teuns had agreed with journalists that his result in stage six of the Vuelta was the opposite to the Tour.

"But I knew that today I could be up there for the jersey," he said. "Of course I was racing for stage win, but in the final climb I went full gas from half-way up. I’m just unlucky that one guy was strong enough to follow me, and he played it very smart in the last kilometre."

Teuns' breakthrough result as a pro came when he placed third in Fleche Wallonne in 2017, and apart from his mano-a-mano with Woods last year in the Vuelta’s Monte Oiz, he also won the Tour de Pologne two years back in large part thanks to his ability to fly up the ultra-steep stage finish at Szcyrk.

All of which begs the question as to whether a leader like Teuns, with theoretically limited longterm GC ambitions, could, in fact, hold onto the jersey on the 21 percent slopes that the Vuelta riders will tackle on Friday’s dauntingly hard ascent of Mas de la Costa.

“We will have to see. I still need to look at the final climb,” Teuns said. "I know it’s pretty hard and steep, but we saw yesterday [on stage 5] the GC riders here are really strong. I will give it everything."

"I've been improving steadily for the last two years, and I’m pretty sure I can do more in the future, too."