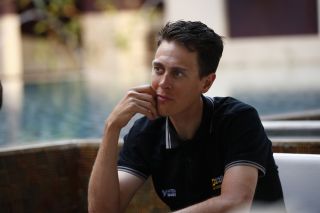 The Netherlands' Niki Terpstra hopes an opportunity might come his way at the elite men's road race at the 2019 World Championships, despite Mathieu van der Poel being the team's leader (Image credit: Bettini Photo)

At the Old Swan Hotel in Harrogate, in Yorkshire, where the Dutch team were holding their pre-race media day ahead of the World Championships elite road races, Mathieu van der Poel was the centre of attention. While the debutant answered the same questions from scores of television crews, a certain winner of the Tour of Flanders, Paris-Roubaix and E3 Harelbeke was lurking in the background, something of a forgotten man.

Terpstra out of Tour of Flanders after crash

Niki Terpstra: I'll be back

Terpstra out of Tour de France with fractured scapula

Niki Terpstra may be the more decorated and experienced rider on the Dutch team, but he is under no illusions that 24-year-old Van der Poel – winner of this year's Amstel Gold Race – is the main man in orange.

"My role is to do a decent finale. Of course, Mathieu is the big favourite and so should be captain of the team," Terpstra told Cyclingnews.

"I'm going well, and I've had good results at big races in the past, but Sunday is a new race, with new chances, and obviously Mathieu is one of the big favourites at the moment. It's pretty simple."

That said, Terpstra did suggest that he wouldn't be riding directly in front of Van der Poel in a domestique's role on Sunday. Lacking a decent sprint finish, his greatest exploits in the Classics have been solo rides, and there's a sense that, in order to stand a chance of winning, he'd have to attack early and alone. It's far from a selfish tactic, as it would enable Van der Poel to follow wheels and conserve energy in the groups behind.

"The Dutch are always known for attractive cycling. We don't want to go into defence mode," Terpstra said. "We don't want to be on the back foot, because then you lose a lot of strength and forces, so it's pretty important not to be in that situation. So, of course, a big part of being on the team is the freedom to go.

"Of course, I'd like to get a good result, but I'll see how I feel in the race. I have enough experience to know if I'm going well or not."

Communication will be key

Communication will be key, as will the way Van der Poel, still relatively new to road racing, commands a team of WorldTour pros.

"We've had just one day together, so it's hard to say what he's like. We haven't yet had the team meeting," Terpstra said. "But it's not rocket science. We have a favourite who is enormously fast, especially at the finish line, so we have to use that weapon."

Terpstra has endured a difficult 2019 season – his first in the colours of French Pro Continental team Total Direct Energie after leaving Deceuninck-QuickStep. He crashed heavily at Flanders, suffering a concussion, and he then crashed out of the Tour de France with a fractured scapula.

He returned in August at the Tour du Limousin and the Tour du Poitou-Charentes, before riding a string of one-day races in Belgium and France to prepare for the Worlds.

"I'm good. I'm excited, and a bit nervous. Before a big race, there are always some nerves. I think that keeps me winning," Terpstra said.

"Of course, I've had some setbacks this season, but this race was always a goal for me. After my injury from the Tour, this was the main goal, and I've worked a lot to be in good shape for this moment."

'The Worlds are always hard to predict'

Terpstra believes the final 14-kilometre Harrogate circuit – seven laps of which will be covered after a long opening loop through the Yorkshire Dales – is well suited to his skill-set, citing the undulations and "constant changes in rhythm". Nor does he mind riding in the rain.

"The Worlds are always hard to predict. We've never raced on the circuit. That's the exciting thing about the Worlds – there are always a lot of question marks," Terpstra said. "In the end, I expect all the good riders – the riders who are in good condition – to be up front at the end. It's so long, so if you have the condition and the legs, you will get up to the front.

"We have a favourite and a strong team, but we're not going to dictate the race. It would be a bit too much to try to do that; the race is too long. Our rivals are too strong to do that, too. That's pretty simple."

Pretty simple, and not rocket science… Terpstra isn't overcomplicating this: just go out and race.