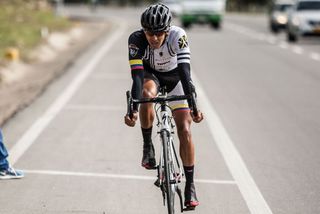 Team Ineos have announced the signing of Colombian rider Brandon Rivera on a two-year contract. The 23-year-old joins from Colombian Continental team GW-Shimano.

Rivera, who hails from Zipaquirá - the same city as Tour de France champion and future teammate Egan Bernal - is the current Pan-American time trial champion. The race was among five victories he took in 2019, including stages at the Vuelta a Colombia and Vuelta de Boyacá.

"I grew up as a mountain biker, but I love climbing, time trials and one-day races," said Rivera in a team press release. "I'm ready to help my teammates when they need it, but also prepared to make the most of any opportunities.

"My goals are clear: to learn as much as I can. I'm aware that it will be my first year in the WorldTour category and I will be racing with experienced riders, but I'm looking forward to it."

Rivera also expanded on his friendship with Bernal, saying the pair have been friends for over a decade, and that his countryman is an example for everyone in Colombia.

"Egan and I are very good friends. We have known each other since the age of 10 when we started on the mountain bike in Zipaquirá. We were both full of dreams, and so to now be riding together again is incredible.

"I have to thank him very much for riding with me all these years and for always believing in me. In Colombia, Egan is an example that dreams do come true and he’s an idol for children and adults."

The move marks a return to Europe for Rivera, who raced for UC Monaco in 2016 and 2017, taking part in the Tryptique Ardennais and Giro della Valle d'Aosta in both years.

Team Ineos coach Xabier Artetxe talked further about Rivera's career to date, adding that the Colombian is a versatile rider who can develop into a strong domestique for Ineos.

"He was racing in Europe two years ago, but he didn't have the best experience as he had a knee injury. But last year he came back to Colombia and he had a really good season. He's stepped up a lot and I think he's ready for the WorldTour," said Artetxe.

"Brandon is versatile and he can become a really good support rider for the team. He's a strong time trialist, he can climb well and he's also fast when sprinting from a small group.

"He's really motivated to use this opportunity to develop himself and become a better rider. It will be important for him to learn how we work and get used to the WorldTour level. Then in the second year I'm sure he can turn into a strong support rider."

Rivera is the fourth Colombian on the Ineos roster for 2020, joining Bernal, Iván Sosa and Sebastián Henao. He's also the team's third new signing alongside Richard Carapaz (Movistar) and Carlos Rodríguez (Kometa U19).

"It’s a dream come true to be part of an incredible team with the best cyclists in the world."Team INEOS are happy to welcome Brandon Rivera to the team after the Colombian penned a two-year contract.📢 https://t.co/Z3Zt5j9bpx pic.twitter.com/4eb45se33INovember 21, 2019