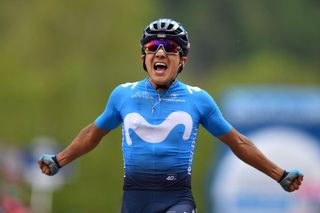 The 2019 Giro d'Italia champion, Richard Carapaz, says that he's ready for "new challenges" at British WorldTour squad Team Ineos, which he has joined for 2020 after three years with Spanish team Movistar.

Speaking at a press conference in Ecuador's capital, Quito, on Tuesday, Carapaz said that he was excited to find out "what it feels like to be in a different team, where they don't speak your language", according to Spanish website AS.com.

The 26-year-old became Ecuador's first winner of a Grand Tour at the Giro in June, beating two-time Giro winner Vincenzo Nibali (Bahrain-Merida) and Jumbo-Visma's Primoz Roglic, who would go on to win the Vuelta a España later in the season.

While Carapaz's 2020 programme is yet to be revealed, he joins a team with a number of proven Grand Tour winners within its ranks, including 2018 Giro champion and four-time Tour de France winner Chris Froome, 2018 Tour winner Geraint Thomas and defending Tour de France champion Egan Bernal.

"I think I'm still young, and have a lot of options still to explore," said Carapaz, who's signed a three-year contract with his new team. "Just like everyone else in life is, you're always going through changes."

Whether he'll have the opportunity to defend his Giro title in 2020, or whether he'll be riding in the service of a teammate such as Thomas, remains to be seen.

However, with the hilly Olympic Games road race also high on the agenda of many Grand Tour riders' programmes next year, there are more opportunities available than usual in 2020.

While not yet selected, Carapaz hopes that he will be able to take one of two places that Ecuador has for the road race at the Tokyo Olympics in July.

"The best riders should go," Carapaz said. "If I can be there, I will be there, as I always do my best."

He said that he hoped 2020 with Team Ineos would be a "fruitful year", but that he leaves Movistar on good terms with his teammates and the management team.