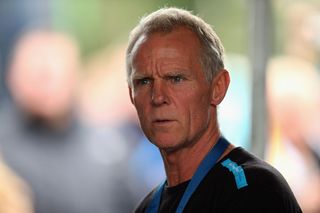 Shane Sutton, the former head coach at Team Sky and British Cycling walked out the medical tribunal hearing of Dr Richard Freeman on Tuesday afternoon after he was accused of being 'a doper' and 'a serial liar'

Sutton quit the hearing after a tense exchange of accusations as he was cross-examined by Freeman's lawyer Mary O'Rourke.

Freeman has already accepted 18 of 22 charges against him, including that he ordered 30 sachets of the banned substance Testogel and then lied to UK Anti-Doping about trying to cover it up.

However, he denies the accusation formalized by the British General Medical Council that he made the Testogel order knowing it was for an unnamed athlete to microdose testosterone.

Freeman's legal team has claimed that the Testogel was for Sutton, who allegedly bullied Freeman into ordering the drug for personal use to treat erectile dysfunction. Sutton denied suffering from the condition. He claimed that he had never heard of Testogel prior to the reporting of this case.

"Our case about Mr Sutton is that he's a habitual and serial liar," O'Rourke said according to reports in the Guardian and other media, while justifying why she feels she needs to cross-examine Sutton in person.

"He's a doper, with a doping history."

Emotions flare as Sutton is questioned

Sutton soon hit back when in the chair when O'Rourke made other accusations. She claimed an anonymous witness told them about vials of testosterone Sutton had a fridge at his home in the late nineties. Sutton denied all the accusations.

“I am prepared to take a lie detector test. Who is lying? The guy who isn’t prepared to look his friend in the eye. This is a guy who came to hospital when I had bleeding on the brain when he had no reason to. To me he is a bloody good doctor and a friend,” Sutton said of Freeman.

When O’Rourke put it to Sutton that he instructed Freeman to order the Testogel, Sutton said: "Now who’s lying? You. I’m sorry but you’re lying through your back teeth and so is your client. I can look you in the eye and swear on my three year-old daughter’s life, I never ordered it."

When pushed about allegations of erectile dysfunction, Sutton hit back, reportedly saying: "You are telling the press I can’t get a hard on - my wife wants to testify that you are a bloody liar."

Soon after, as O'Rourke continued to quiz Sutton further, he vented his anger and walked out.

"I’ve spent two days waiting to come up here. I’ve come and told the truth. I’ve taken your bullying, your gutter tactics in the press. You've accused me of all kinds of things. I’m going to leave now. I don’t need to go through this shit fight," Sutton was reported as saying, attacking Freeman, who was sat near him but behind a screen after being deemed to be a vulnerable witness.

"The head of BC wanted him out, he turned up to work several times drunk, he was like a Scarlet Pimpernel. I had two critical cases when I couldn’t get hold of him."

Speaking outside the tribunal to the media, Sutton said he would consider returning on Thursday to give more evidence.

Earlier in the day the tribunal heard that the Daily Mail tabloid newspaper had acknowledged a request to give what O’Rourke claims is a secret affidavit from Sutton that is “totally inconsistent” with evidence he gave to a British parliament inquiry into doping in sport in 2017.

O’Rourke claimed that document was in the newspaper’s managing editor’s safe as “an insurance policy against any potential claims for defamation by Sir Bradley Wiggins, Freeman or Sir Dave Brailsford” and that it contained “a number of lies”.